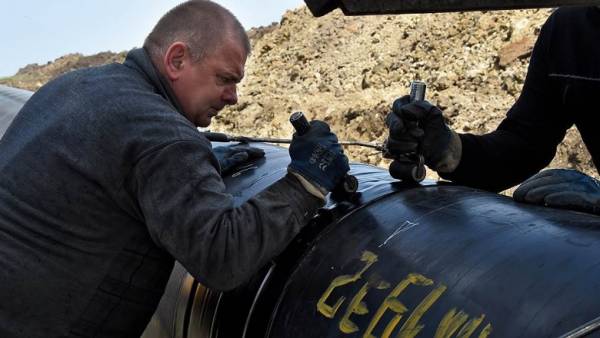 U.S. authorities increase the pressure on Germany in the matter of the gas pipeline “Nord stream-2”. According to them, the tube could be used by Russia for the installation of exploration equipment in the Baltic sea, said the Deputy assistant Secretary for energy Sandra Odekirk. She also recalled that the adopted last year act CAATSA allows the U.S. President to Donald Trump to impose sanctions for investment in the Russian gas pipelines may be affected by the European partners of “Gazprom”.

Laying of “Nord stream-2” may be a means to install a new intelligence system in the Baltic sea, said Thursday in Berlin, the Deputy assistant Secretary of state for energy Sandra Odekirk.

“If we look at the ability of governments and companies to use infrastructure as a means to embed devices and technologies that can listen, track and monitor (events.— “Kommersant”), it raises concerns about this particular project, an underwater pipeline in the Baltic sea”, she said (quote via Reuters).

Sandra Odekirk reiterated that adopted last year the law CAATSA gives the US President powers to impose sanctions against companies that invest or otherwise support the Russian projects for the export of hydrocarbons through pipelines. Partners “Gazprom” on the “Nord stream-2” Shell, Engie, OMV, Wintershall and Uniper, they agreed to provide project bridge financing totaling up to €4.75 billion

Deputy assistant Secretary of state said that any company involved in pipeline projects for the export of hydrocarbons from Russia, is in a situation of “heightened sanctions risk.”

While Washington intends to use diplomatic methods to stop the “Nord stream-2,” said Sandra Odekirk.

Note that the set of arguments that use the US differs little from the situation of the 1970-ies. According to the memoirs of Otto Wolff von Amerongen, head of the Eastern Committee of German economy in the years 1952-2000, in the discussion of the transaction “gas—pipes”, us officials tried to dissuade Germany from the conclusion of this agreement, on the grounds that the creation of a gas pipeline from the Soviet Union would allow Soviet tanks to refuel it during a potential invasion of Western Europe.

Before the construction of the gas pipeline Urengoy—Pomary—Uzhgorod in 1981, the administration of Ronald Reagan imposed sanctions on the supply of us equipment for this project, and in 1982 extended them extraterritorially. Then the governments of France, Germany, the UK and Italy announced us sanctions are illegal and they were removed in November 1982.

Public pressure from Washington to Berlin on the project “Nord stream-2” occurs on the background of the crisis in us-European relations caused by the US withdrawal from the nuclear deal with Iran. On Wednesday, the EU leaders at the summit in Sofia discussed how Europe could save the deal and to protect European investments in Iran from the consequences of us sanctions. As said today the head of the European Commission Jean-Claude Juncker, EU leaders agreed to resume the so-called blocking regulations — acts of the EU that allow European companies not to comply with us sanctions. They were first developed in 1996 in response to U.S. sanctions against the energy sector of Iran.

Yesterday at the summit, the head of the European Council and former Prime Minister of Poland Donald Tusk said: “Looking at recent decisions of the President of trump someone could even think: with friends like that who needs enemies. But frankly, Europe should be grateful to President Trump, because thanks to him we got rid of the illusions.” He added that Europe needs to help itself.