SK filed a case against the journalist, calling to blow up the Crimean bridge

MOSCOW, may 17 — RIA Novosti. SC opened a criminal case against American journalist Tom Rogan, “recommending” Ukraine to blow up the Crimean bridge. This was reported by the official representative of Department Svetlana Petrenko. 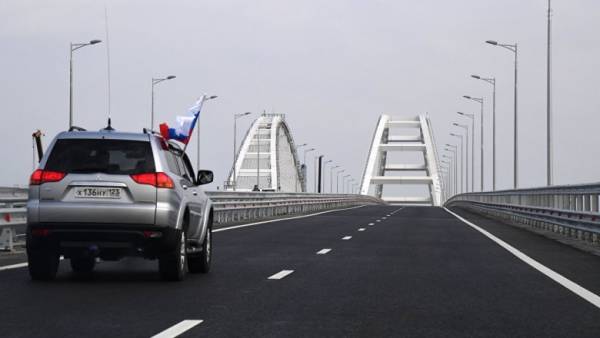 Provocative article with the headline “Ukraine should blow up Putin’s Crimean bridge” was published in the edition of the Washington Examiner on Tuesday.

According to the investigation, it has “seen signs of public calls to terrorist activities on the territory of the Russian Federation”.

The comprehensive psycho-linguistic examination. Began investigations to establish all the circumstances of the crime.

In addition, conducted preliminary examination in respect of the editor of the Washington Examiner.

What is called the author

The author of the Washington Examiner called the bridge “an outrageous affront to the very essence of Ukraine as a state.”

“Fortunately,” he writes, ” the Ukrainian air force could do air strikes to temporarily withdraw the construction of the building, and a considerable length of the object would “reduce the risk of casualties among passers-by it people”. According to the journalist, the erosion will almost certainly lead to an escalation of the conflict, but Kiev sent Moscow a “clear signal”.

Open Tuesday Kerch Strait bridge was the longest in Russia and Europe, its length was 19 miles. He joined Krasnodar Krai and the Peninsula. Its capacity — about 14 million people a year.