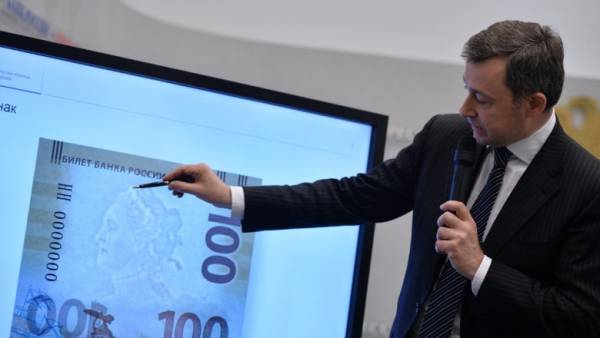 Mr Dvorkovich, Goznak to the football world Cup is preparing a new commemorative banknote. What denominations?

Arkady Trachuk: It will be the banknotes of 100 rubles. The specific date of bills in circulation can not name, this will determine the Bank of Russia. We can assume it will happen before the opening of the championship.

You know, how many will be released bill?

Arkady Trachuk: About how much will be released the souvenir hundred-ruble note will be announced at the presentation of the banknote, which is expected in late may. Commemorative banknotes are produced according to special principles. Their circulation is limited in advance, and usually, it is relatively small.

Bills 200 and 2000 rubles has been so popular and rare in our wallets that are sometimes used as Souvenirs. Not are we facing a shortage of new money?

Arkady Trachuk: the Rarity of the new banknotes just because they have not yet so much is printed compared to the old denominations. It will take time, there will be more and they will gradually replace those banknotes that are in circulation. Will be slightly less than the five thousandth bills, slightly more than two — thousands. This is a normal and natural course of things.

Are there any plans in a new style update, and the whole series?

Arkady Trachuk: Sooner or later it will happen. The design is the same element of protection of banknotes, as well as others.

So the design has to be updated periodically.

It is likely that the design update of the old denominations will take into account the style of banknotes of 200 and 2000 rubles.

Arkady Trachuk: the Protective complex is updated at least every five years. The design, of course, more conservative.

The current used for quite some time, today’s banknotes with the “urban series” has more than 20 years, the first of them came into circulation in 1995. Of course, already Mature design changes. Another thing, it will happen as planned, as the availability of new design options, new protective elements.

The final decision on the issue, changing the design and everything else — with the Bank of Russia. And that he will inform about it.

And it is possible to produce a bill that can not be faked?

Arkady Trachuk: This task before us and not worth it. Fake bills as closely as they will be checked.

For example, if a forgery will be used untrained retail are markets, small shops, they will try to fake what in such circumstances would be more likely to pay attention to: watermarks, color-changing or image security features other striking visual elements. On the other hand, if a counterfeit bill is scheduled to load into the ATM, then forge will have other machine-readable signs, i.e. those that checks the receiving device of the ATM.

Our goal is to make the protection more comprehensive. Even assuming that the fake bill at some stage will still be accepted, it is easily separated at the next step and thus will not cause significant damage.