People in the Cossack form, which whips beat protesters on Pushkin square in Moscow on 5 may, flogged with whips of their own colleagues. The radio station Business FM said the Cossack blogger Vasily Boxes. 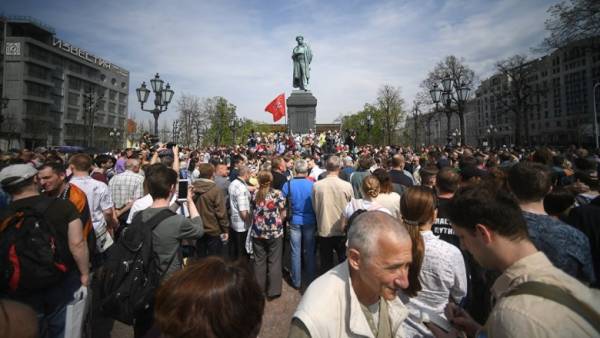 According to him, at a special gathering of the Cossacks conducted an internal investigation and punish those who reacted to the provocation too hot.

Gathered, learned, understood, how could it be that brought to this. Obviously, there were provocateurs. But, nevertheless, we punished those who rebuffed whips. Punished according to their own Cossack customs and traditions. Whipped. Whip and got to know next time.Basil Adikovski blogger

On Monday, the Tver court of Moscow has fined for swearing on a thousand rubles, Yevhen Fedorchenko, who in Cossack uniform came to an unsanctioned rally on may 5.

Earlier, a source familiar with the proceedings told RIA Novosti that the man who beat whip participants of the unsanctioned rally, punished for disorderly conduct.

The head of the presidential Council on human rights (HRC) Mikhail Fedotov earlier told RIA Novosti that the Council has asked the Metropolitan police, Ministry of interior and the Department of regional security detailed information on protests may 5, to understand exactly who attacked protesters in the capital. According to him, the Council would like to understand whether it was real registered Cossacks or those who are trying for them to disguise.

The mayor’s office agreed to a rally on may 5 on Sakharov Avenue with the number of participants to 15 thousand people, but one of the organizers, Alexei Navalny, still called out on an unauthorized March on Tverskaya street. In the mayor’s office called such appeals provocation and said that in the case of the uncoordinated actions of the authorities will act in accordance with the law.