Russian ships with cruise missiles “Caliber” will be held on permanent duty in the Mediterranean sea, said the President of Russia Vladimir Putin at a meeting on military construction in Sochi. The meeting was attended by the leadership of the Ministry of defense and the heads of enterprises of the military-industrial complex. 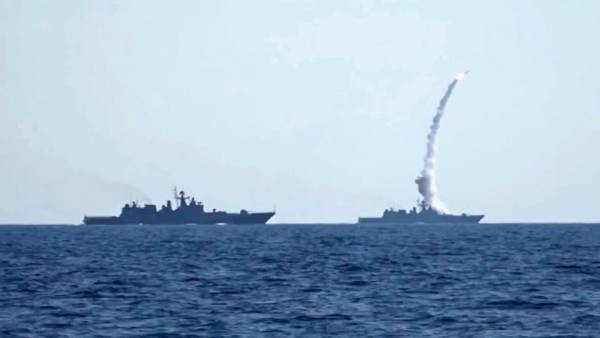 According to the President, in 2018 planned 102 of the trek ships and submarines of the Russian Navy. This means maintaining nepravilnosti Navy at a record 2017

“In view of persistent threats of terrorist attacks in Syria in the Mediterranean sea our ships with cruise missiles “Caliber” will be held constant fighting watch”, — Putin said at the meeting.

The President stated expanded in recent years, the presence of the Russian Navy, primarily in the Mediterranean and in the North Atlantic and in the Asia-Pacific region. In addition to the role of the Navy in ensuring the economic security of Russia, providing strategic parity and national interests, Putin said his role in “showing our flag in key regions of the world ocean”.

Russia’s military operation in Syria with the support of the Navy goes with 2015 Now in the Mediterranean sea there is a Russian squadron consisting of up to 15 warships and support vessels, reported the press service of the Russian black sea fleet. According to observers, in 2017 during a military operation off the coast of Syria were from one to three frigates and patrol ships. In addition, several months near Syria operated naval aircraft carrier group led by the heavy aircraft-carrying cruiser “Admiral Kuznetsov”.

Frigate “Admiral Essen”, “Admiral Grigorovich”, as well as diesel submarines of the standing force of the Navy in the Mediterranean sea in 2017 repeatedly struck with cruise missiles “Caliber” fighters in Syria. A family of cruise missiles “Caliber” developed by OKB Novator (part of the concern “Almaz-Antey”). This type of missile designed to destroy ground targets (3M-14), according to unofficial sources, have a range of at least 1,500 km and high accuracy.

On the eve of a meeting with the leadership of the defense Ministry, Putin called “an absolute priority” improving the strike capabilities of the Navy, “first of all, by equipping the ships with cruise missiles “Caliber”” with the latest intelligence and targeting. “Their use will significantly improve the accuracy and to provide a high concentration of strikes on targets”, — said the President.