Erdogan said the inability of the UN to solve global problems

ANKARA, may 16 — RIA Novosti. he accused the UN of failing to solve the world’s problems, referring to the inaction of the organization in connection with the clashes in the Gaza strip, which killed dozens of Palestinians. 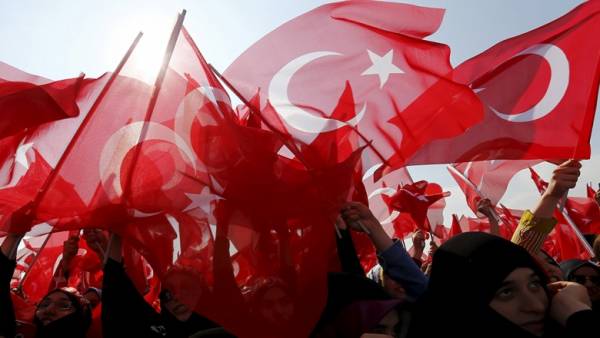 “The UN is unable to solve the problems of the world. She is exhausted, exhausted, it collapsed,” — said Erdogan, speaking at the presidential Palace for iftar — the evening meal during the Muslim Holy fasting of Ramadan. It quoted the Anadolu news Agency.

The Turkish President has criticized international community silence and double standards in the face of violation of rights and freedoms of the Palestinians.

If these attacks occurred in any other region, it would have caused protest all over the world. But, unfortunately, the world community has reacted scornfully to the actions of Israel against the Palestinians. With the exception of Turkey, representatives of the Islamic world, standing up for the rights of oppressed peoples, and some conscientious representatives of Western countries, the rest of the world watched this tragedy only as a spectator.Tayyip Erdgasproduzent Turkey

He urged the international community to make all efforts to stop the actions of the Israeli authorities towards the civilian population of Palestine. “If the Israeli tyranny does not give the world very quickly slide into chaos, ruled by the thugs,” — said the Turkish leader.

Erdogan accused the U.S. of aiding Israel. “The decision to move the Embassy to Jerusalem, ignoring UN resolutions and international institutions, the US had encouraged the leaders of Israel,” — said the Turkish leader.

The protest began in Gaza on Monday amid the 70th anniversary of the founding of Israel and moving the U.S. Embassy from tel Aviv to Jerusalem. Israeli soldiers were shooting to kill protesters. According to recent reports, the clashes killed 61 Palestinians. Palestinian leader Mahmoud Abbas declared three days of mourning.

Erdogan called Israel’s actions in Gaza genocide. He announced in Turkey three days of mourning for those killed in the Gaza strip and the decision to withdraw for consultations, Turkish ambassadors in the United States and Israel. The Ministry of foreign Affairs of Turkey invited the Israeli Ambassador to leave the country.