Moscow. May 15. INTERFAX.RU. The bill on the counter on Tuesday passed the first reading in the state Duma. 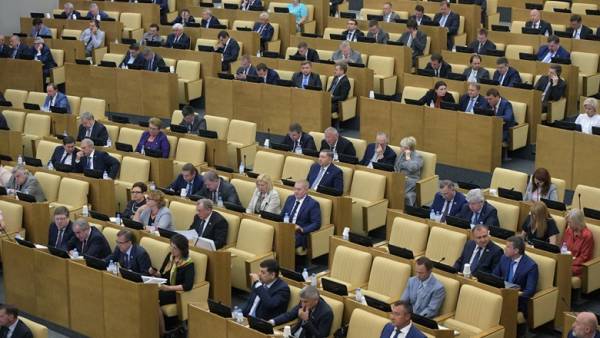 This framework draft law — “On measures of exposure to (counter) the unfriendly actions of the United States of America and (or) other foreign States” — provides the President and the government broad powers to impose retaliatory restrictions a political and economic nature in relation to the United States and States that have joined anti-Russian sanctions.

For its adoption voted all factions of the state Duma.

At the same time, the deputies adopted a resolution which defined the basic directions of modification of this bill a second reading. In particular, it is planned that the law will not mention individual industries and products and it will allow you to get away from excessive concretization, and thereby expand opportunities for response.

In the version in which the bill passed Tuesday on first reading, the President and the government have the right to use prohibitions and restrictive measures through the introduction of up to 16 different responses concerning, in particular, the import of agricultural, alcohol and tobacco products, medicines, export of rare earth metals.

The possibility to suspend cooperation on the nuclear, aircraft, and rocket engines. According to the document, Russian authorities may prohibit U.S. and other foreign banks to participate in the organization of privatization of assets. In addition, the authorities can limit or prohibit U.S. and foreign companies to perform certain types of services, including consulting, audit and legal to ensure state and municipal needs and the needs of certain types of legal entities. The bill imposes a limitation on the participation of foreigners in privatization of Russian property.

It is assumed that this kind of specifics will leave the bill in its second reading, scheduled for may 17; the concept is the same document, stated in the state Duma, will continue.

We to the second reading excluded from this bill not only medications but any specific types of goods, services and industries. All rules that out. The decision on restrictions will be made on the basis of two criteria. First, we fix the law that is vitally necessary goods, if their analogues are not produced in Russia, it is impossible to deny. Secondly, any such decision on the ban on citizens that will be widely discussed.Andrew Saitarly Deputy head of the faction “United Russia”

In turn the Plenipotentiary of the government in the state Duma Alexander Sinenko said that the government is interested in the broad discussion of provisions of the bill, since it is possible lawsuits against companies. “With high probability we can predict a great number of attempts in court to challenge how the government’s actions and try to compensate for the losses that are in some way caused by our foreign contractors, and perhaps domestic. Therefore, the Russian government is keen to get a clear, legal basis for their actions,” he said.

“It is extremely important to protect our economy”, — said earlier to journalists the speaker of the state Duma Vyacheslav Volodin. According to him, “we are talking about hostile action from the United States and several other countries, and the need to resist it.”

The exchange of sanctions

On 6 April the US announced a new round of sanctions policy against Russia. Among trapped under the sanctions of companies dominate the structure of Deripaska’s RUSAL, En+ group, GAZ group, Agroholding “Kuban” Basic Element Ltd, B-Finance Ltd, “the EuroSibEnergo”, “Russian machines”. In the “black list” also included Renova group Vekselberg, NPV Engineering and “Gazprom Burenie” Rothenberg, “Ladoga Management” Shamalova and the Bank of RFK (belongs to the “Rosoboronexport”, which too was under sanctions).