Blue diamond Farnese was donated to the wedding of Isabella Farnese, daughter of the crown Prince of Parma. 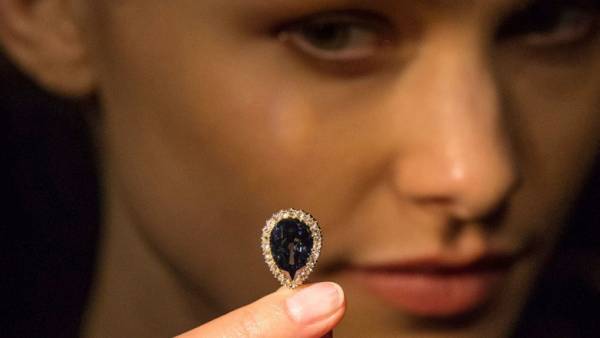 A rare blue diamond, which at different times belonged to different Royal houses of Europe, was sold at Sotheby’s auction in Geneva for USD 6.7 million.

Blue diamond Farnese was donated to the wedding of Isabella Farnese, daughter of the crown Prince of Parma. In 1715 she married the king of Spain, Philip V.

Jewel then 300 years handed down and became the property of the Royal houses of France, Italy and Austria.

A diamond with a weight of 6.1 carats were mined in the famous diamond mines of golkonda in India.

The buyer of the diamond is decided fairly quickly — it took only four minutes of trading. The auction house hoped to gain for the 3.5− $ 5 million, but the final price was higher.

We do not doubt of a good result, but the initial cost was $ 3.5 million, but in the end the stone was sold for 6.7 million dollars.Daniela Makefilelist for jewelry at Sotheby’s

According to the auction house, blue diamond decorated the diadem of the Queen of France Marie-Antoinette.

The buyer of the gemstone preferred to remain anonymous.