SBU conducted search in the editorial. 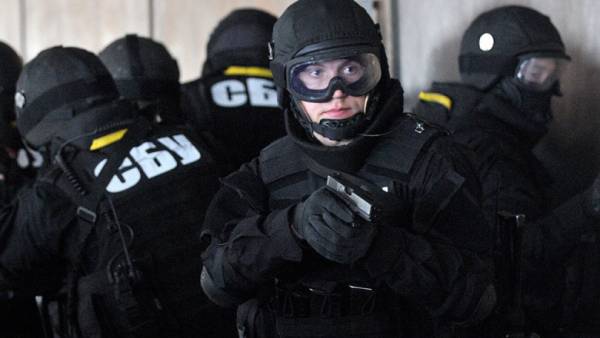 This morning in Kiev employees of the security Service of Ukraine (SBU) conducted a search in the editorial office of the news Agency “RIA Novosti — Ukraine”. Its head Kirill Vyshinsky detained. Formal charges against the reporter is not voiced, but the representative of the SBU Elena Gitlyanskaya made it clear that the Ukrainian security forces “revealed the activities of a network of mass-media, controlled by the Russian Federation”.

That the office of the information Agency “RIA Novosti — Ukraine” conducted a search, the SBU announced itself this morning. For a few minutes before it became known about the arrest of Kirill Levin — head of the publication. “From 10 in the morning there is no connection neither with Cyril Wyszynski, nor with other representatives of the Agency. When only one employee who is on a business trip in Sochi,” — said the source “Kommersant” in the information Agency.

No formal charges, the secret service has not yet announced, but from the statements of the representative of the SBU Elena Galanski, you can make a logical conclusion.

“Employees of security Service of Ukraine together with the Prosecutor of the Republic of Crimea (which Kyiv considers to be its sovereign territory.— “B”) uncovered the activities of a network of mass-media, controlled by the Russian Federation. Law enforcement authorities established that they were used by the aggressor (Russia.— “B”) as part of the hybrid information war against Ukraine”, — wrote Mrs. Gitlyanskaya in Facebook directly during the search.

She later added that the issue of the detention of the head, “RIA Novosti — Ukraine” and said: “we Have a reasonable evidence base, which we will publish after the completion of the investigative actions”.

Staff, “RIA Novosti — Ukraine”, which was able to communicate, “b”, confirmed these assumptions.

As told “Kommersant” one of the representatives of the leadership of this media outlets, the Ukrainian security services became interested in the work, “RIA Novosti — Ukraine” after it made several reports on the celebration in Ukraine on 9 may.

“We had understood that in the current political situation we work on a powder keg. All these four years, we realized that the situation could explode at any moment, — he admitted.— We worked absolutely legally as Ukrainian officially registered company, honestly pay all the taxes. No claims on the material or the accounting of the state of Ukraine to us can not have. It is, rather, about the claim to us as journalists.”

As an employee of the Agency said “Kommersant” that the detainee Kirill Vyshinsky — a citizen of Ukraine. To him, according to the interlocutor, it will be difficult to apply Ukrainian laws and to accuse him of separatism, because such activities Mr. Vyshinsky did not lead. Nevertheless, the interlocutor of Kommersant said that the Ukrainian authorities have repeatedly repaired the journalist obstacles during his return from abroad, searched his belongings, trying to find incriminating evidence. “This situation lasted for several months, then the problems with the check-stopped”, — said the source “b” in “BBC news — Ukraine”.

At the same time interlocutors “” close to the Ukrainian security forces, said that according to their information in mediastructure some people were “direct employees” the Russian news Agency “RIA Novosti”, “acting not in the interests of the state Ukraine”. However, even the SBU recognized that those Russians who still work in the “RIA Novosti — Ukraine”, are in the country legally.

At the same time interlocutors “” close to the Ukrainian presidential administration, said that “the well-known numerous cases where we were detained Russian journalists, who arrived in Kiev under the guise of tourists, and expelled them.”

But this time the situation is different, says Kommersant’s source. “We are talking about the work of Ukrainian citizens in the Russian mass media or propaganda. Details shall clarify the relevant structures operating in a legal channel”, — said the interlocutor of Kommersant.

Apparently, long these parts will not have to wait. The representative of the SBU Elena Gitlyanskaya on his page in Facebook called just “wait a few hours.”