Astronomers have found the most voracious black hole in the Universe

MOSCOW, may 15 — RIA Novosti. Australian astrophysicists have found in the constellation of the southern Fish record-a voracious supermassive black hole J2157−3602, which will be able to eat our Sun in just two days. Her photographs have been published in the journal Publications of the Astronomical Society of Australia. 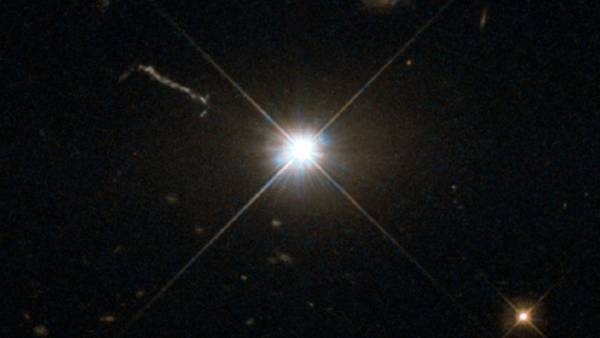 This black hole is growing so fast that it shines thousands of times brighter than the rest of the galaxy. Its glow is produced by a huge mass of gas which it constantly draws to itself. If it were in the milky Way, it would Shine 10 times brighter than the Moon, and eclipsed the light of all the stars.Christian wolf (Christian Wolf), a Scientist from the Australian National University in Canberra

Supermassive black holes exist in the center of almost every galaxy. Unlike black holes, resulting from the collapse of stars, their mass several million times more solar. They occasionally swallow stars, other celestial bodies and gas and emit a portion of the captured matter in the form of jets beams of heated plasma moving at relativistic speeds.

These emissions, like today, say the astronomers, are the result of the fact that black holes are not capable of absorbing matter in unlimited quantities. There is a limit that astrophysics is called the Eddington limit, at which the matter starts to accumulate in the vicinity of the black hole in the form of a hot “doughnut” made of matter, accretion disk, where matter particles RUB against each other, are heated to ultrahigh temperatures and emitted a black hole in space.

As told by the wolf, opening abnormally heavy black holes that emerged in the first days of life, the Universe, leading scientists to search for objects that violate this limit and would explain the existence of these mysterious giants.

While astronomers were able to find only a few black holes, closely approaching the Eddington limit, but not exceeding it.

Wolf and his colleagues discovered the first candidate for such a role, studying a distant galaxy located in the constellation southern Fish. During these observations, the attention of scientists, recalls astrophysicist, attracted an unusually bright lone star, located away from the clusters of galaxies and the already known star clusters.

After analyzing its spectrum, the Australian astronomers were surprised to realize that they are dealing not with a star, and galaxy, remote from us at 12.2 billion light-years. The main source of its glow turned out to be a giant black hole whose mass was about 20 billion times higher than that of the Sun, and the brightness — 695 trillion times that comes close to the Eddington limit.

As wolf notes, most of this light appeared in the result of the “stretch” x-ray and ultraviolet glow J2157−3602 on the way to the Ground. Accordingly, if the black hole was in the center of the milky Way, life on our planet would not exist as it would have destroyed the radiation of this object.

We don’t know how there was this object in such a short time. We hope that we will be able to find even more voracious black holes that will help us to reveal the secret of their birth and learn what role they played in the “enlightenment” of the Universe in the first era of her life.Christian wolf (Christian Wolf), a Scientist from the Australian National University in Canberra