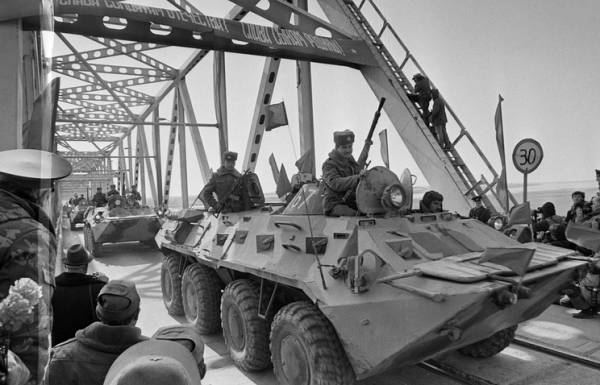 Soviet soldiers on BTR-70 during the crossing of the bridge across the Amu Darya in Afghanistan, 1988

Exactly 30 years ago, may 15, 1988, the Soviet Union started withdrawal of troops from Afghanistan. For the nine months has left the country more than 100 thousand Soviet soldiers. How the decision was made to leave Afghanistan and what it brought out at TASS.

The timetable for the withdrawal of Soviet forces was approved in the framework of the so-called Geneva agreement, or the Agreement on settlement of the situation in the Republic of Afghanistan. Formally it was a negotiation between the Pro-Soviet government of Afghanistan headed by Mohammad Najibullah, and Pakistan, behind which stood Washington. The USSR and the USA participated in the negotiations only as “guarantors”. The Afghan armed opposition did not participate in the negotiations, having rejected the opportunity in the beginning.