The presence of fraud in high-profile criminal case of “thief in law” nicknamed Shakro the Young will consider the Moscow city court Presidium. A hearing is not initiated by lawyers and the prosecution. The defense believes that this is only a tactical move and want to deny one of the most important arguments ahead of the appeal and to hide the obvious fraud. 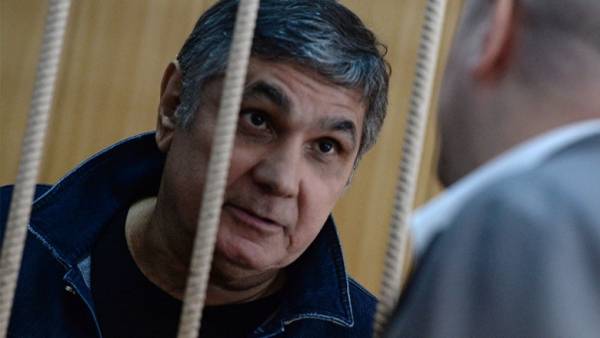 The Deputy Prosecutor of capital Vladimir Vedernikov asked the Presidium of the Moscow city court to recognize the illegal detention of “thief in law” Zachary Kalashov and his two accomplices for three months. It follows from the cassation prosecutors, copies of which are available to Business FM.

A hearing on this matter will take place on may 18. However, according to lawyers, the appeal of the Supervisory authority to the court only at first sight pursues compliance with the letter of the law: actually this is an attempt by security forces to save the verdict in the high-profile case that ended one of the most influential in the post-Soviet space authorities for a period of nine years and ten months.

In cassation representation the Deputy Prosecutor of Moscow asks to cancel the judicial act two: the decision of the Tver court of capital on 15 June 2017 and the decision of Moscow city court from June 30, 2017. First Zakhar Kalashov, as well as two other defendants, Gerson Gamidova and Nikolay Nikolaev, extended the period of stay in the detention center for 20 days — until July 4, 2017. The Moscow city court, in turn, extended a defendant’s term of imprisonment for more than years each for another two months and 11 days — until September 15, 2017.

The reason for the appeal of the Prosecutor’s office to the Presidium of the Moscow city court was the difference in the plot of the charges which was brought against the defendants at the investigation and the prosecution appeared in court. The Prosecutor’s office stated that the decision about attraction as accused on 20 April 2017, the available materials on the extension of detention differed significantly from the indictment. Thus, the documents indicate different initials accused Philip Domaskina and Batyr Bekmuradova, registration plates of cars who purchased defendant Andrew Kochanov (known as Italian), legal form of chop Zaslon, as well as the forms of complicity in the crime victims defendants Kitaev and Domaskina (in the first version, they were called members of the criminal community, and in the final participants of the criminal group).

In addition, the indictment unexpectedly turned out to be some “unidentified accomplices”, was added “a large scale extortion”, and in the story of the prosecution of Kalashov appears the date of the defendants Prokhorov criminal acts against the victim of the Lion Garamova (in the first version, no date or year was not specified). Prosecutors pointed out that the courts when extending the accused’s arrest did not have “adequate information presented Kalashov, Nikolaev and Gamidova the prosecution”. She requested the Presidium of the Moscow city court to cancel them.

The falsification indictment lawyers Zakhar Kalashov and the other defendants have repeatedly stated in the trial, which took place in Nikulinskiy court of Moscow ended on 29 March this year in a conviction. More than ten defendants, including Shakro Young, were convicted of two counts of extortion (“a” and “b” part 3 of article 163 of the criminal code) in 2015-2016: 8 million rubles from the owner of Elements restaurant on Rochdelskaya street in Moscow Zhanna Kim and 10 million rubles from businessman Lev Garamova.