MADRID, may 14 — RIA Novosti. The Parliament of Catalonia approved a second round of one of the most radical members of the separatist movement, the representative of the party “Together for Catalonia” Kim Torr head of the Catalan government, he calls himself the interim head of generality, as the real head of the Cabinet, in its opinion, is Carles Pujdeme. 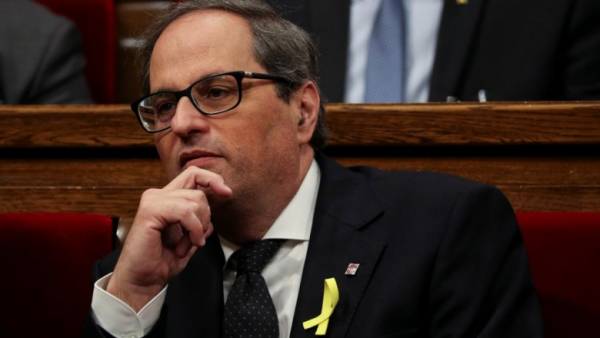 To win in the second round, a candidate had to receive a relative majority of votes in Parliament. He was voted 66 deputies from the party of “Together for Catalonia” and “Republican Left of Catalonia”. Against voted 65 deputies — representatives of parties supporting the territorial integrity of Spain, the largest parliamentary faction of “Citizens”, the socialists, the popular party and Catalunya en Marta-Podem (Catalan branch of Podemos).

The key was the votes of four MPs from the leftist separatist party “the Candidacy of national unity”, which abstained. In the first round, which took place on Saturday, the balance of votes was similar, however, to win on the first attempt, the candidate was required to obtain an absolute majority.

In his speech in the Catalan Parliament on Monday, Torre called “to fulfill the mandate of 1 October” (October 1, 2017 in Catalonia held an illegal referendum on independence, which was attended by just over 40% of voters, with 90% of them voted for an independent state) and create a “Republic for all”. Torre calls himself “the acting head of Generalitat”, as legitimate head of government, he believes Carles Pokdemon, dismissed by Spanish Prime Minister Mariano Rajoy at the end of October last year and waiting in Germany, the decision of the German court extradition. Torre also called for the establishment of a government in exile — the Council of the Republic, and in Catalonia — the Assembly of elected representatives, parallel to the Catalan Parliament structure.