MOSCOW, may 15 — RIA Novosti. Russian President Vladimir Putin on Tuesday will take part in solemn opening of the motorway bridge across the Kerch Strait, reported the press service of the Kremlin. 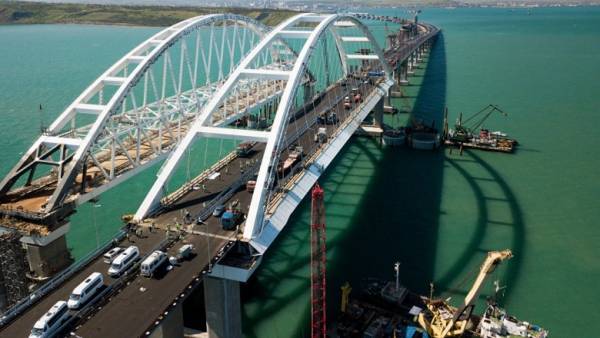 The bridge across the Kerch Strait that will link Crimea and Krasnodar Krai, will be the longest in Russia — its length is 19 kilometers.

“The head of state will get acquainted with the readiness of a Single center traffic management and all operational services to the work of transport crossing through the Kerch Strait,” — stated in the message.

The information center “the Crimean bridge” told me that on the highway you will pass a convoy of construction equipment. The event will be attended by the representatives of Mostootryad from different regions of the country, among them leading specialists of the industry, past global construction: BAM, preparation for the APEC summit in Vladivostok, the Universiade in Kazan, Olympics in Sochi.

Car traffic on the bridge will be launched the next day, may 16. This is six months earlier than the contract term.

Last Sunday in Kerch were launched traffic on the new overpass that is built over avtopodzavodom to the bridge to provide a transport link between the Arshintsevo district and the city centre without crossing autopatched.

The customer of construction of road approach to the bridge from the Crimea is a state institution of the Republic of Crimea “road Service of the Republic of Crimea”. Construction contractor roads 1B is JSC “WAD”, the total cost of construction, according to the contract, amounted to 6.9 billion rubles. The capacity of the bridge is 40 thousand cars and 47 pairs of trains per day, 14 million passengers and 13 million tons of cargo per year.