To the Earth close asteroid Ghost

With the Earth may 16, 2018 at 01:05 Moscow time will converge on the minimum distance of the asteroid Ghost 2010 WC9, previously lost by astronomers, according to EarthSky. 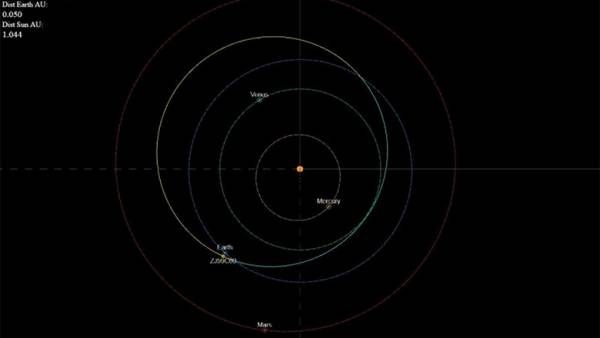 Rapprochement with the celestial body happens at a distance of about 203 million kilometers from Earth (about 0,53 distance to the moon), its speed will be about 46 thousand kilometers per hour. The diameter of the asteroid is estimated at 60-130 meters.

The asteroid was first noticed in November of 2010, then in December of that year he disappeared from sight.

Again find a heavenly body was only may 8, 2018. Astronomers say that the threat of the asteroid to the planet no.

Coming closer 2010 WC9 Land will be for data of celestial bodies minimum for the last 300 years. Experts say that an asteroid belonging to the Apollo group, you cannot notice with the naked eye, but can be seen in an Amateur telescope.

In February of 2018 in Russia offered for USD 210 billion to create a fusion megarocket to repel the attack from outer space (asteroid defense weapon).