The law of conservation of energy

Alexander Novak will remain in place. 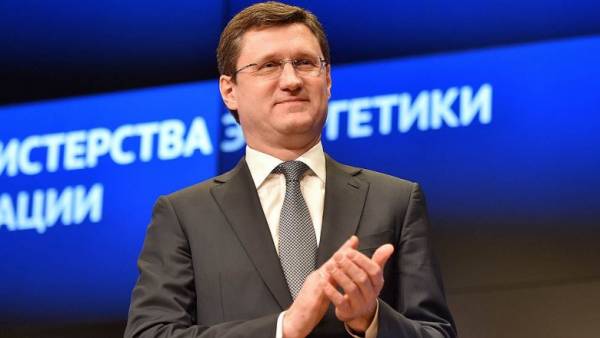 Energy Minister Alexander Novak will retain his post in the new government, according to sources “Kommersant”. They explain the reassignment of that officer during the work has achieved several important successes, particularly on transaction OPEC+, without obvious failures. However, this did not help him to rise to the level of Deputy Prime Minister was expected in the industry.

Alexander Novak, who six years ago was headed by the Ministry of energy, will remain at his post in the new government, said the interlocutors of “Kommersant” in the industry and the White house. According to them, the decision will be officially announced this week. However, it is unclear will there be any changes to the structure of the Ministry of energy and leave the Ministry a Deputy of Mr. Novak.

Alexander Novak 47 years, he began his career in GMK “Norilsk Nickel”, in 2000-2002 he was Deputy head of administration of Norilsk, then moved to the administration of the Krasnoyarsk region, where in 2008 from the post of first Deputy Governor went to the Ministry of Finance. There Mr. Novak in the post of Deputy Minister she was responsible for working with the regions and the financing of industry, while in 2012 he headed the Ministry of energy.

Meanwhile in the industry from the Minister waited even save a career. Interlocutors “” in the year 2017 began to talk about what Alexander Novak can claim in the new government as “energy” Vice-Prime Minister after Arkady Dvorkovich and distribution of its powers among several Deputy Prime Ministers. This assumption was due to the successful work of Alexander Novak to achieve and implement the agreements with the OPEC countries, primarily Saudi Arabia, to reduce oil production. Following the deal, OPEC+ oil prices rose from $30 per barrel in January 2016 to the current $77 per barrel, which seriously simplified the formation of the Russian budget.

In addition, Alexander Novak, quite successfully led negotiations with the Ukrainian authorities for the supply of electricity to the Crimea, as well as representatives of the European Commission — about the payment for the supply of Russian gas to Ukraine.

However, perhaps due to pure luck during his work in the industry did not happen major accidents with a large number of victims, such Sayano-Shushenskaya HPP in 2009 or the Raspadskaya mine in 2010. “Some outright failures, which could put the blame of the Ministry, was not, — said one of interlocutors of “Kommersant”.— Even the sanctions are not yet too affected by the situation in the industry, hydrocarbon production is increasing, although it is difficult to say what is the percentage merit energy”.

Kommersant’s sources traditionally complain that the Ministry often does not have a clear position on sensitive issues and acts as a buffer in disputes between major industry players.

But Alexander Novak has managed to avoid serious conflicts with the leaders of major state-owned companies and heads of other ministries.

Although the Vice Premiership to Mr. Novak in the end did not get, a number of interlocutors of “Kommersant” see some advantages. In previous years Alexander Novak formed his team in the Ministry and acquired a certain influence, whereas in the case of appointment to a new position, this work would have to start from scratch. Curator of energy as Deputy Prime Minister is Dmitry Kozak, which, according to interlocutors of “Kommersant”, comfortable enough for Novak. And with the future of first Deputy Prime Minister Anton Siluanov he has a good relationship.

“Novak has clear goals for the next couple of years — deal with OPEC, the completion of the energy construction in the Crimea and Taman, gas negotiations with the European Commission and Ukraine”, — says one of Kommersant’s sources. In addition, an important issue is the completion of the tax maneuver in the oil industry, although now there is no certainty that a solution will be found in the foreseeable future.