The Commission of the Federation Council on the protection of sovereignty has prepared a draft report, which stated that the United States and several other countries of West in 2011 is trying to prevent President Vladimir Putin for the presidential elections. About it reports “RIA Novosti” with reference to the head of the Committee Andrey Klimov. 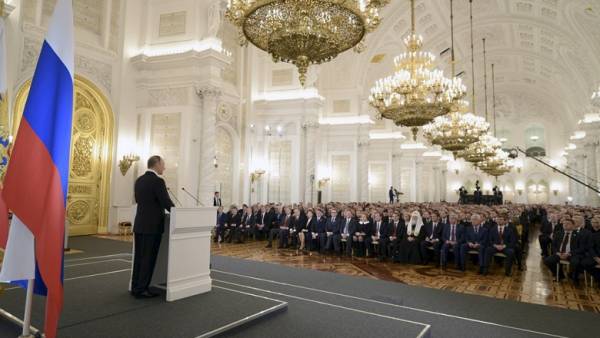 Mr. Klimov said that there were attempts to “discredit the personality of Putin and its foreign and domestic policy in Russia and around the world, the maximum the division of environment of the President, including longtime friends and colleagues.”

Also the head of the Commission of the Federation Council, said that Western countries tried to organize the isolation of Mr. Putin, not only on the world stage, but also within the Russian Federation. In particular, according to him, the media has blown the scandal and was covered by “flimsy issues”, designed to provoke Vladimir Putin into committing “unacceptable mistakes”.

During the last presidential campaign, said Andrei Klimov, was made of ten kinds of outside interference. Among them, in particular, the conducting polls in the Russian regions at the expense of foreign financing, the imposition from outside of a specific presidential candidates (who, exactly, Mr. Klimov is not specified), conduct propaganda from abroad to the territory of Russia, carrying out cyber-attacks from abroad on the resources of the CEC.

The Senator said that a report on the presidential elections in Russia, the Commission plans to present to colleagues on may 30.

The Russian presidential elections were held on 18 March. Vladimir Putin participated in the elections as independent candidate and got 76,69% of the vote. 7 may have been inaugurated.