SOCHI, may 14. /TASS/. Russian President Vladimir Putin hopes that the new government of Armenia relations between Moscow and Yerevan will not develop less dynamically than before. 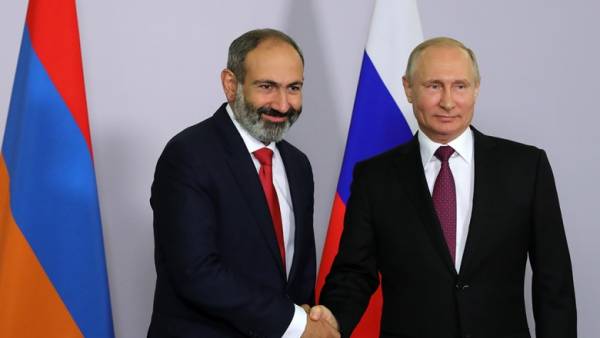 “I wish you success at the head of the government and we hope that our relations will develop just as steadily as it was until now,” said Putin in his first meeting with the new Prime Minister of Armenia Nikol Pashinyan.

The Russian President stressed that Russia “considers Armenia as our closest partner and ally in the region,” adding that this applies to economic cooperation, and security issues. Putin expressed hope that “very good results”, which demonstrates the economic cooperation between Russia and Armenia in recent times, “will be able not only to preserve but also to multiply”.

Putin reminded that Russia remains the leading trade partner of Armenia accounting for over 25% of Armenia’s trade turnover and Russian investments account for 35% of all investments in the Armenian economy.

“We have lately observed the increase of the turnover by 25%. While growing very fast the supply of agricultural products from Armenia to the Russian market in the previous months, the increase was 38%,” — said Putin, stressing that “it is very good dynamics”.

For its part Pashinyan said: “There is something that needs no discussion, is the strategic allied relations between Armenia and Russia on this issue in Armenia, there is a consensus.”

I think none of us never intended and will not put into question the strategic importance of Armenian-Russian relations. We are determined to give a new impulse to these relations and in the political sense, in the economic and trade sphere.Nikol Pashinian, the Prime Minister of Armenia

He also expressed hope to develop relations with Russia in the military-technical sphere. In this context, Pashinyan recalled the may 9 Parade, expressing “admiration for the achievements of the Russian military-industrial complex.”

The new Prime Minister of Armenia emphasized: “We very much appreciate the balanced stance that Russia has demonstrated in the course of our political crisis.” “It was a very constructive position. And I think that it is highly valued not only by our government, but also Armenian society,” said Pashinyan.