In Russia for the first time found Hermione

Still these finds in the Northern black sea coast was not possible to do. 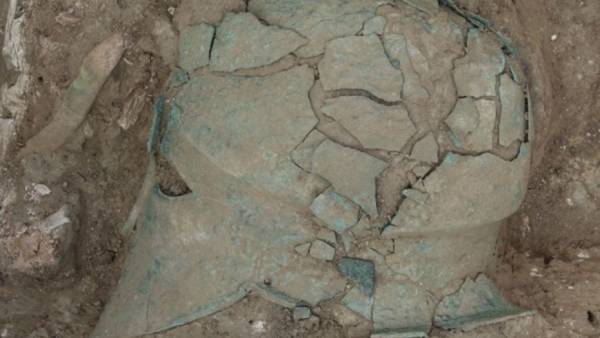 Researchers from the Institute of archaeology RAS during the excavation of burials on the Taman Peninsula found a Greek bronze helmet of the Corinthian type. They wore heavily armed soldiers-hoplites.

This is the first discovery of its kind in the history of Russian archaeology — usually of Greek warrior with his weapons and tried to bury in the homeland.

About the events the press release of the Institute of archaeology RAS.

Hoplite warrior was the basis of classical Greece, both militarily and politically. They were medium landowners, wealthy enough to buy expensive bronze helmet and other heavy armor, and shield goplon. In a battle closely serried phalanx of hoplites were almost invulnerable to infantry Eastern States that contributed greatly to the victories of the Greeks over the barbarians in the Greco-Persian wars, and on other fringes of the Hellenistic world — for example, in the Northern black sea — Taman, where there was a Greek Polis, founded by Greeks colonists.

Hoplites formed a “middle class” of classical Greek antiquity — the basis of so-called “democracies”, which consisted of the majority of citizens.

Hats were an important component of the armour of the Hoplite — that’s a place where sculptors have depicted strategy Pericles and the goddess Athena.

Helmet found by archaeologists is the so-called Corinthian type, the group with the provisional name “Hermione”. He is from the first quarter of V century BC.

The only similar helmet on the territory of the former Russian Empire was found in the middle of the XIX century in the province of Kiev in the Kurgan near the village of Romanovka. There he, apparently, came with a single migrant. In Taman, the situation is quite different — here regularly lived the Greek population. The discovery was made in the necropolis of the “Wave 1” in the southwestern part of the Taman Peninsula. Here in the second quarter of the fourth century BC to the VI century BC there was a Greek Polis.

In that era a significant part of the Taman Peninsula was part of the Bosporan Kingdom — Hellenic state, situated on both sides of the Kerch Strait. In fact the Greek city-States occupied the territory, directly adjacent to the sea and at some distance from him, and beyond them lived the settled and the nomadic tribes of Sindh, Meotians and, possibly, the descendants of the ancient Cimmerians.

The type of hats Hermione appeared in Greece in the VI century BC and were widely used until the second quarter of the V century BC — that is, approximately between the period of the Persian invasion and the temporary pause in the Greek-Persian war caused by the defeat of the Athenian expedition, tried to attack the Persian Empire from the sea.

Originally these helmets completely cover the head and was like a bucket with slits for eyes.

The helmet is well protected, but is limited to a review around, that is why it is believed that the soldiers in such helmets generally fought in the phalanx, and they didn’t have to follow the movements of the enemy from the side. However, by the fifth century BC, the Greeks had to change tactics. Faced with the Persian light infantry with slings and bows, the Greeks created their own form of light-armed warriors — peltasts. Then the helmets of hoplites began to do so, warrior had the opportunity to raise the helmet and slide rearward. This opportunity had developed almost all types of helmets. The top of the helmet was often decorated with a crest of horsehair.

Helmets are a pretty rare find, and in our country occur mainly in the burials of noble warriors — the classic hoplites in not a very affluent Northern black sea region were not so much. More or less EN masse they appear in the burials of the Bosporan nobility from the IV century BC, however, belong to other types.

Corinthian helmet from the tomb “Wave-1” is the first such finding in subterranean necropoleis of the Greek colonies of the Northern black sea. According to archaeologists, is a helmet of a Greek warrior who died in battle. It is unknown what war he was involved, but it could be a war of conquest of the Bosporan Kingdom against the Syndic — States that were located in the southern part of the Taman Peninsula. Helmet testifies to his status as a full citizen of the Polis, most likely one of the Bosporan cities, and also about a certain level of welfare.

Earlier in the same archaeological season, scientists have discovered in the necropolis of the burial places of warriors-riders differ from those found previously. They are warriors with weapons, and beside them lie bridled horses. In some graves in the vessel Dating graffiti with typical Greek names. Burial made at the same ceremony and date from one time — the third quarter and the beginning of the last quarter of V century BC.