Zakharova gave evidence of lies of Ukraine to the UN

Official representative of Russian foreign Ministry Maria Zakharova gave evidence lies Ukrainian authorities, who stated that they organized the event on the propaganda and false news is being held under the auspices of the UN. 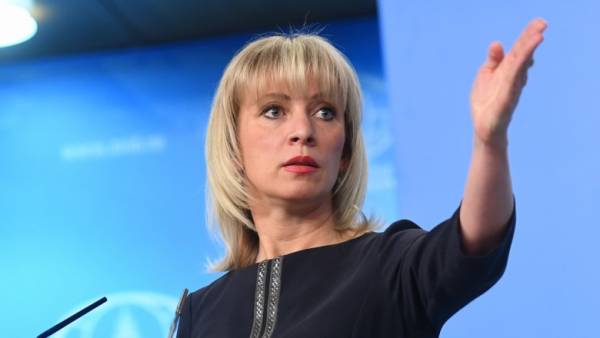 On his page on the social network Facebook Zakharova posted a screenshot of the invitation postproductivist of Ukraine to the UN on action for combating propaganda and fakes, which reported that it held with the participation of the UN Committee on information.

However, the Chairman of the Committee stated that any events under their auspices have not been and tried to explain it to the Ukrainian delegation, says the TV channel “Star”.

In addition, according to the representative of the Russian foreign Ministry, the event was allegedly attended a sniper Yulia Matvienko, the participant of the project “Invisible battalions”, which is implemented with the support of the U.S. Agency for international development.

May 11, Zakharova said that invited the Ukrainian delegation at the UN, the Russian diplomat threatened with physical violence. Introduced them as veterans of the so-called anti-terrorist operation (ATO) in the Donbass.