Why 100 years ago collapsed Empire jewelry of Carl fabergé and Fabergé as a brand is gone from Viktor Vekselberg, to South Africa in the investigation of Forbes Life. 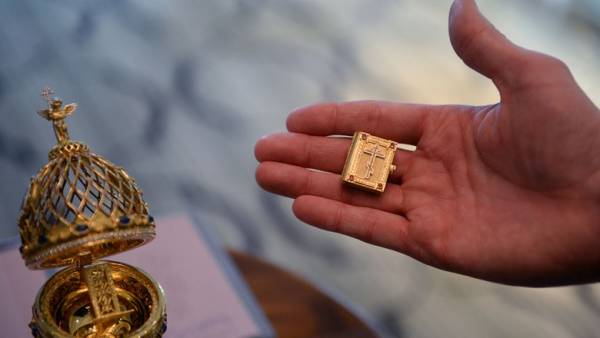 Jewelry Faberge steadily increasing in price for ages. Faberge — the perfect art investment with guaranteed high returns for long and short term investments. The last 10 years works of art of the late XIX — early XX century the use of the excess demand at auctions and fairs. But the heirs of the famous jewelry names do not get anything from sales. That destroyed the legendary jewelry firm? Who owns the world famous brand today? What business interest was Viktor Vekselberg, when he bought a collection of Faberge from the Forbes family and was opened five years ago, the Museum in the Shuvalov Palace in St. Petersburg?

September 1918. Petrograd. All mixed up in the building on Bolshaya Morskaya, 24. The owner is 72-year-old court jeweler Carl Faberge and his eldest son Eugene hastily gather my belongings. The Windows shots are heard, and the door continuously calling: customers in a panic bear Faberge for storing jewelry.

Prior to the publication of the decree of the Central Executive Committee “On the abolition of private ownership of urban property” is a few months. Carl Faberge will not wait for the arrival of the expropriators. The owner of the state millions of dollars running in Europe under the guise of courier.

In Europe already live spouse, daughter-in-law, six grandchildren and a son Nicholas. Three other sons, Agathon, Eugene and Alexander, temporarily remain in Petrograd, trying to save the firm from collapse.

However, the flight became Carl Faberge’s not a salvation but a tragedy. He wandered around the world and from Bolshevik Russia came the terrible news: house, Villa, stores, and shops looted, property and jewelry stolen, the middle son of Agathon was arrested twice and imprisoned.

The family fortune Faberge melted, and with it the health of the head of the company. Without his company, Carl Faberge was able to live only two years.

Not only the eggs

Today we know of about 250 000 items created by the jewelry firm of fabergé in 45 years (1872-1917). Carl Faberge was an artist, and gemologist, and restorer. But his main talent business: Faberge gathered around him the finest artists of his time. In total, it employs 500 people from the sellers to the accountants. It was a huge jewelry Empire, including workshops, design studios, stores and branches (in Moscow, 1887, in Odessa in 1890, in London in 1903 and in Kiev, 1905).

The fabergé workshops worked and the master stone-cutters who created objets de fantaisie, figures of animals and people made of a single piece of stone and a complex enameling techniques and Florentine mosaic.

But today say “Faberge” — mean eggs: decorative Easter eggs fabergé created in industrial quantities. Dainty little egg-key rings of various styles and finishes, precious pendants, which hung on the neck, on the belt, brooches, gathered in the necklace. Prince Felix Yusupov recalled that “on the balls of Faberge eggs by the dozens scattered on the glittering parquet floor.” And the memories of Muscovites, in 1950-e years an antique shop on the Arbat was literally covered in Faberge eggs.

Fetish jewelry eggs made for the Imperial family. The first egg the hen was ordered by Emperor Alexander III as an Easter gift to Empress Maria Fedorovna in 1885. Last completed (by 1917 there are still two unfinished) Imperial Easter egg — “the Order of St. George”, was established in 1916 on gold, silver, ivory, rock crystal. (Both the first and the last egg is now exhibited in the Faberge Museum in the Shuvalov Palace in St. Petersburg.).

Called Imperial eggs presented to the Russian emperors Alexander III and Nicholas II, their wives and mothers. At the moment of the 50 Imperial eggs known the whereabouts of only forty-three.

In addition to the Imperial Faberge did, and luxury Easter eggs for other significant customers: widow Varvara Kelch (7 eggs), one Easter egg fabergé firm has performed for Prince Felix Yusupov, Duchess Consuelo of Marlborough, Baron Rothschild and Nobel oil.

As Victor Vekselberg bought the best private collection of fabergé

2018, Moscow. On Petrovka, 10, a few steps from the house, where before the revolution he worked in Moscow shop Faberge opened a jewelry boutique network Louvre, one of the two shops, the rest of the network from 12 shops. In the best of times, a few years ago, when flagship boutique Louvre worked at the Ritz Carlton, where goods were sold under the brand Fabergé. The owner of a chain of Paris was then a collector of Antiques, businessman Vladimir Voronchenko. Today Voronchenko Director of the Faberge Museum in the Shuvalov Palace in St. Petersburg, Chairman of the Board of Fund “Link of times”, founded by Victor Vekselberg in 2004 after purchasing the world’s largest collection of Faberge from the Forbes family.

Buying an object behind the subject for over 30 years, Malcolm Forbes collected the best collection of Faberge. Its value is that it includes all areas of jewelry Faberge.

After the death of Malcolm Forbes and his sons decided to sell the meeting: first, they took 20 items, then 70, and then all that was left of him.