Recall that the speaker of the state Duma Vyacheslav Volodin announced the introduction on may 14 of this bill — in the group of authors he himself, the head of the Federation Council Valentina Matvienko, head of the faction, first Deputy speaker Ivan Melnikov, Alexander Zhukov and Andrey Isaev. 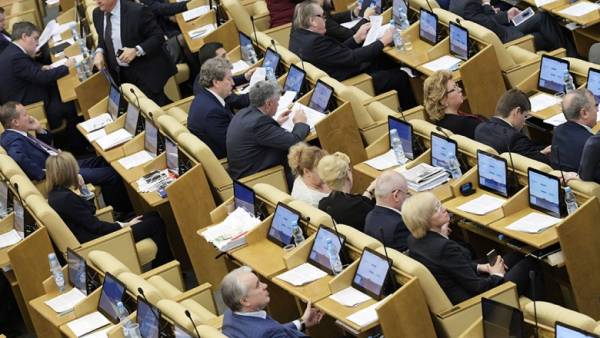 A fine of up to 600 thousand rubles, deprivation of liberty up to 4 years are the sanctions for a new article in the criminal code, said informed “RG” the source in the state Duma. Criminal liability, under the new bill, as threatened for actions and for inaction in the enforcement of sanctions.

For example, you came to the Bank, and you refuse to open the account based on the fact that you are in the sanctions list, — gave the example of Andrei Isayev. — Simple operator will not be held responsible for it. The question in this case can only go on the person who has the right to make final decisions.

To punish, therefore, can only officer issuing the order.

According to Isayev, the precedents for the implementation of sanctions on the part of companies operating on the territory of the Russian Federation is. So, faced with this, one of the deputies of the state Duma, which is under sanctions: he announced the closing of a Bank account for this reason. The situation eventually was resolved in favor of the member, but we need a legal mechanism that will not allow the history to repeat itself.

There are other cases where the company pursuant to the sanctions tried to terminate the contract and to fulfill the obligations associated with it.

— It turns out a situation in which Russian law is broken to enforce the law of another country aimed at the destruction of the Russian economy, — he concluded.

The bill, in particular, written in favor of citizens of Russia living in Crimea. For example, if under us sanctions deny opening accounts for or granting loans, demanding the return of money, etc.