Why more men do not wish to have children. 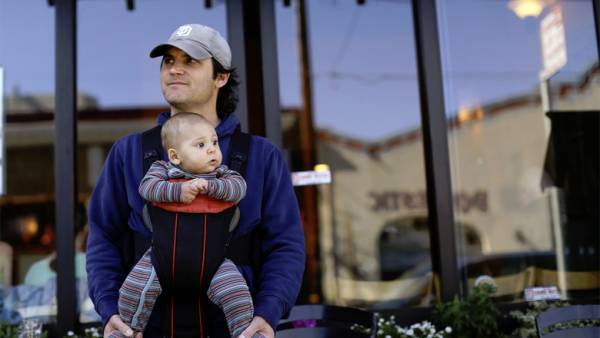 Today approximately every fifth resident of Moscow and fifteenth — Russia is a staunch opponent of motherhood. It is clear that demographers, government officials and the public are sounding the alarm and trying to intervene. But the noise of these discussions lurks the interesting faces — men-childfree. The portal iz.ru looked at him closely.

Usually they do not advertise their beliefs in public. First, because it is often impossible to say with certainty, do not have even the most inveterate bachelor child, and second, because the agenda is intense and the position is unpopular. You need to have the charm and charisma of George Clooney, to to 52 years painless to fool the public with stories of his reluctance to be fruitful and multiply, and then to marry and produce two at once. But it’s George Clooney, he will forgive almost anything.

The reasons why the state as you can and know how — somewhere discouraging initiatives, somewhere competent and generous assistance programs stimulate the birth rate, is clear. The country always need mass. From the point of view of evolutionary biology’s clear: we are programmed to replicate and multiply on their genes, thus providing what we call “extension of yourself”.

But staunch supporters of childlessness learned finesse and evolutionary, and state, biblical, and public traps. They believe not in the demographic crisis and the overpopulation of the earth and prefer to live not for the benefit of the Motherland or the offspring, but for pleasure. In fairness, most of the men while honestly doing their compulsory program, giving birth to one child there, another here, and some just can’t stop and stamp their genes into the winning mode (Tsyganov — 8, Okhlobystin — 6, Mikhail Efremov — 6, Bruce Willis — 5 sting — 6, Eddie Murphy actually 9 children).

These enthusiasts are a bit wealthy and star fathers are always in sight, but there are ordinary loving men who are not afraid of any unstable situation in the country or the world, no perspective do not feed a large family. Against this background, the most mysterious remains the sect men who decided to do without offspring. And because they don’t have to give birth to bear fruit, to fight morning sickness and stretch marks, to risk my career and figure! Just decide to fatherhood and to the extent possible financially and emotionally to then provide his decision. But no.

(all names have been changed)

I never wanted children. Don’t want and I don’t think I will want in the future. I totally pinned all of these theories about my “sequel”. Not that “after me the deluge”, but I don’t believe these stories about genes and offspring. I don’t think it changes anything on the planet, and ambitions to give birth to a genius who will change something, I don’t have.

To conflict with women I have not reached, perhaps because I correctly “merged” in that moment, when began the talk on “not to make us small.”

Now I live with a woman who didn’t want kids or pretends that he does not want, in any case not makes me feel terrible talking about it.

I think one of my women still gave birth to me boy. All saying that the guy suspiciously similar to me, but the woman is married, she’s in no way acknowledged. At some point I began to think about my child, but I understand that the last thing we want this family life. I would even accept if the woman gave birth to my child and give it to my upbringing. Would “aunt mom”, and I would be doing it with your family. But I understand that it is a utopia, so it is what it is. And I’m fine.

Concerns about the “departing train” I do not feel.

In the end, if I feel it, the man can be a father in old age, well, then, if that is possible and to adopt. But no parent of a fever I’m not experienced and not experienced.

and taught children in Russia 300 years ago

Perhaps I would have kids with the right woman if he feared talking about his homosexuality. It’s such a stereotype that if you’re a certain age, not married and not have kids, so something’s wrong with you. But since I have a reputation of a womanizer, such problems I have. Well, the right woman, I honestly have not met. For the most part of it or pushed on the idea of family and motherhood females who look at you as a potential father of the family, or careers and feminists that you did not look, live your life and use you for sex. There are now actually many, usually women of middle and old age, many already have children from previous relationships and marriages. By the way, the perfect partner, accept you for who you are, and not hysterics on the subject of ticking clocks and women’s destiny.

If I wanted kids, I think I started them, but to have just because it’s all done, or based on their care of you in old age, I will not. I’ve seen families in which parents did everything they could, invested in kids, and then it turned out that nobody do not need anything other than apartments.

I’d rather succeed in a career and make enough money to be in old age looked after me honestly — for a fee, and not under duress due to some commitments.

I don’t think I’d make a good parent. In any case, I would not risk. Basically, I’m good. What the destiny experience.

Don’t know what I will say in 10-15 years, but now children are not my thing. First, I don’t really like, I have no emotion in front of these kids. Secondly, I enjoy skydiving in my spare time I travel around the world. What children? I have friends who wanted to have a family and children, here they are all good. Although also like to see: a birth and married “shotgun”, you pretend that everything is fine and they just dreamed about it, and in fact, many a day would be glad to switch with me life like a movie. If you compile the manifest childfree men, it turns out that they do not want the responsibility, the key word in relations to them “comfortable”, they see themselves as independent loners, tend not to fulfill socially valuable roles as parents, are interested in his career and freedom, perhaps they themselves did not come from a childlike age, but have successfully disabled all of their “genetic counters” in favor of a carefree existence. But before you start to write them off and blame all the sins of irresponsibility to lack of foresight, it makes sense to look at what motivates them, and how skewed modern society has created a philosophy of unproductive consumers. The desire to live happily. Yeah, maybe it borders on selfishness, but on its own, would it be so bad? This is a real problem of time: a society of hyperactive, muzzled the work and lives of the people who like doing everything right, but there is no happiness. The UN regularly initiates research projects that measure the indicators of the level of happiness in different countries, trying to figure out who and where to live well. In the ranking of traditionally lead the Scandinavian countries, Russia in recent years, ranging between 49th and 64th place, that given the nearly 200 countries participating in the research are not so bad. But the question of what, besides peace and wealth, makes people happy, remains open.

Despite the obsessive promotion of socially approved options: family — to-do family, a successful career and a healthy lifestyle, — the person here is focused on the wants and needs of the individual and insists on dressing them, even if they are alone, downshifting, alcoholism and infertility.

Well, it’s funny to assume that under the influence of stereotypes and concerned public of the businessman, for example, Mikhail Prokhorov would one day illuminate that he will be much happier if you start a family and bear children. Although, as we know, in these matters, at any stage, the unexpected plot twists. The fear and unwillingness responsibility. Here, on the one hand, it’s very serious, because the future of the family institution, which is experiencing a stage of “metal fatigue”, long a concern for everyone, including the state. If you are under a certain age have not created a family and gave birth to heirs, you will be assigned a status of “infantile age”, a person irresponsible and frivolous, and your ranking on gender fair dramatically drops down. But other things being equal try to derail this ranking, if a man leads a large company, holds a responsible position or conscientious about his work or family. Is it possible for one to bear children to determine the present before you a man or not? Not overrated at all whether this archetype unshaven male who, after completing the program “house, tree, son,” often cease to be interested in all except his tablet, fishing and drinking and the question of his wife: “When’s the last time you talked with your own children?” only shrugs?

In the mid-1990s, psychologist David bass had a large study, which interviewed more than 10 thousand representatives of 37 different cultures, valuing the opinions of people of different religions, races, States and Nations. The conclusion was clear: women tend to choose husbands are economically well-off partners. It is understood, and its supported and Henry Ford, which at its plants pay men a salary that is proportional to the number of children in their families. It knows every businessman of an average hand, the setting on Friday evening to a crowded gold diggarama popular bar.

Yes, over the last decade, the world is rapidly changing and some women have learned to make yourself on par or more than men. However, excessive demands to the man left. In Russia, men traditionally expect high performance in all respects: the ability to earn money, to share responsibility for the upbringing of children and the ability to love one woman all his life. Such status of the superhero is on the shoulder slightly, and pressure provoke aggression and stress. As a result, the man refuses to follow social stereotypes and standards and increasingly predictable prefers independent swimming is overloaded with obligations family boat. On the other hand, if childfree men? No! As long as they are a small group of misfits and gender dissidents, they do not affect the alarming statistics. In addition, in an effort to avoid the trap of double standards, have to admit that if a woman for whatever reason does not want to have children and are entitled to it, and the man may remain with his ideas on this subject. Another thing is that at a certain point personal choice starts to form the overall picture. And since now all the processes happen very quickly, quite possibly in the foreseeable future, we will see what new social crises could provoke men, voluntarily opting for a childless life. And whether they are able to reshape a gender agenda, which has never been rosy and smooth.