Moscow. May 10. INTERFAX.RU. The new government in the implementation of the “may” decree of the President of the Russian Federation will have to consider the risks, including the various international restrictions that can act against Russia, said Prime Minister Dmitry Medvedev. 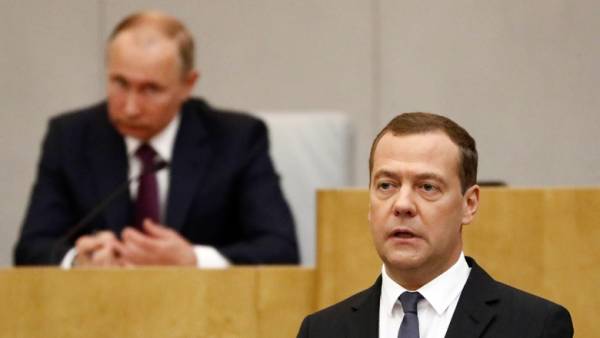 “We don’t know what will be the international situation as it will evolve, what new challenges or limitations we probably will face, but in any case these risks, we must take into account”, — said Medvedev at a meeting on the issue of the measures for implementation of the presidential decree “On the national goals and strategic objectives development of the Russian Federation for the period up to 2024”.

The main thing that emerges from the decree, it is further improved living standards of our citizens, increase in life expectancy, including life, active, and, therefore, it is good medicine, comfortable environment, clean environment, and certainly steady income.Dmitry Medvedevputin-Minister

The Prime Minister added that “the tasks facing the government, are unprecedented in complexity and scale, and require all of us the same serious effort — thoughtful, careful and informed decisions.” “They will require large legislative work”, — said Medvedev.

According to him, the decree contains guidelines for the development of the country. “It’s the economy, for obvious reasons, for us a stable development with low inflation, moderate unemployment, with a further increase in the share of non-oil sector, of course, with the introduction of the maximum number of innovation, production of competitive products, development of new markets”, — said the Prime Minister.

The day of the inauguration of Russian President Vladimir Putin, it became known that he signed the decree, which sets forth national goals that the government must ensure until 2024 for the “implementation of breakthrough scientific and technological and socio-economic development of the Russian Federation”.