Journalists in Cannes was met with an ovation the film Serebrennikov 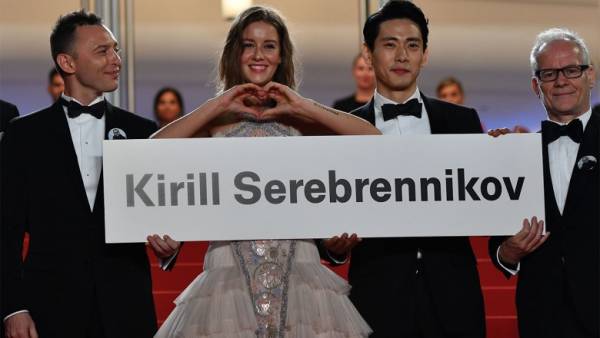 The screening for the media was held on Thursday, the final picture credits journalists for a long time applauded the film-makers. World premiere of the Russian film which entered the main competition of the festival took place the day before yesterday evening, then the audience also met the film with a standing ovation.

Pieces of silver was not able to personally present his film in Cannes, as August 2017 he is under house arrest on charges of embezzlement of budget funds in the implementation of the project “Platform”. The Director was detained in St. Petersburg during the shooting process of “Summer” and taken to Moscow. Silver mounted picture, while under house arrest.

From Boney up to Penelope Cruz: the stars at the opening of the Cannes film festival

The filmmakers and guests of the premiere, walking the red carpet, spoke in support of the Director. Actors, film producer, and Director of the Cannes film festival Thierry Fremaux walked with a banner that says Kirill Serebrennikov, and some of the guests of the premiere unfolded a poster with the phrase Free Serebrennikov or showed worn over a dress shirt with the inscription “#freekirill”.

The storyline of the picture is the story of Dating and relationships 19-year-old Choi, a 26-year-old Mike Naumenko and his wife, Natalia, and the establishment of the Leningrad rock club and record the first album of Choi. The action takes place in the summer of 1981 in Leningrad, where under the influence of Led Zeppelin, David Bowie and other rock stars of the emerging Russian rock. That summer Choi recorded his first album, and Mike Naumenko gathered a group of “Zoo”.