A third of the citizens are going to the parades in their cities. 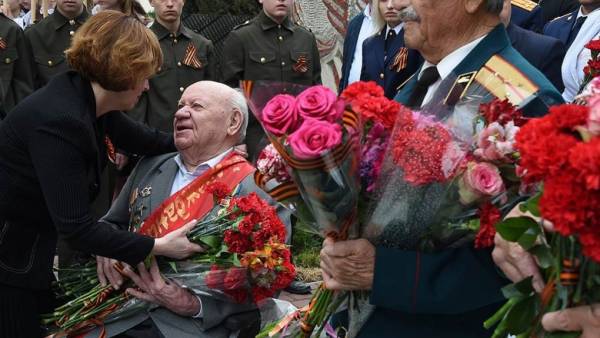 Nearly half (48%) of Russians rejoice in the Victory Day, and 29% of Russians are may 9, sorrow. This is evidenced by the results of the survey “Levada-center”. According to FOM, 54% of respondents called Victory day a national holiday, a public celebration it is considered 36%.

of the City destroyed and rebuilt

80% of respondents FOM the Russians announced that it will join the “memorable events” in honor of Victory Day in his village. It should be noted that in 2012, this figure increased by 20%: then at the events they plan to attend 60% of the population. Thus, according to VTsIOM, 55% of respondents planning to take part in the “celebrations”. In comparison with 2012, this figure rose by 18%: then to celebrate the Victory planned by 37%.

At the same time, according to the “Levada-center”, in 2018, 73% of Russians will take part in the celebrations. In comparison with the previous year this figure has decreased slightly: in 2017, 76% of respondents planned to celebrate the Victory Day. The greatest number of Russians planned to join the festivities, was in 1995 — 50 anniversary of Victory Day. Then the event was planned to come 82% of the citizens.

Otrashenie every third (31%) plan to watch the fireworks, and one in four (24%) — will spend the day with loved ones.News

Hologram of Stalin and 3D weapons. As technology tell about the great Patriotic war

29% of respondents said that they usually attend the Victory parade (in 2010 the event was visited by 10% of Russians). The Russians believe that the main functions of the Victory day parade is a commemoration of the heroism of the people in the great Patriotic war (34%) and the expression of gratitude to the ancestors (32%). According to the respondents, the celebration also helps to foster patriotism among the younger generation (19%). In turn, 21% of citizens believe that the parade is an opportunity to show the military power of the state. All data in this paragraph the results of opinion polls.

According to 54% of respondents the public opinion Foundation, the Victory Day is a national holiday, state holiday, it is considered 34%. According to “Levada-center”, 48% of Russians on 9 may feel “joy due to the fact that the country won in the great war” (in 2015, the joy felt by 59% of citizens), grief experiences 29% of respondents.