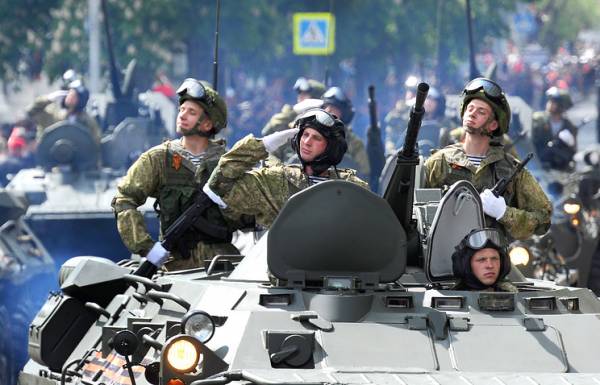 SEVASTOPOL, may 9. /Offset. TASS Andrei Medina/. Military parade, thousands March “Immortal regiment”, which was attended by every tenth resident of the city, as well as action “Letters of Victory” celebrates Sevastopol on may 9, the correspondent of TASS.

For the city-hero of the day – a special holiday together with the whole country Sevastopol celebrated not only the Victory in the great Patriotic war, but also the anniversary of the liberation of the city from the Nazis on 9 may 1944.

“Rain goes the third day, and this morning the sky cleared up a bit. My family could not come, and me and my husband grandfathers fought, both had a war to win. For us it is a personal holiday, this is the story of our family,” said Natalia, who came to the centre of Sevastopol, to go in the column “Immortal regiment” with her husband and two children.

A town with character

Celebrations in Sevastopol began at 9:00 (GMT) with the rise of naval flags and flags of colorization on the black sea fleet ships, then to the Eternal flame at the memorial of Heroic defense of Sevastopol in 1941-1942, the city management and fleet laid wreaths and flowers.

At 10:00 (GMT) began the parade of troops of the Sevastopol garrison, to commemorate the 73rd anniversary of Victory in the great Patriotic war. The parade was attended by more than 1.5 thousand soldiers, members of the national guard and emergency situations Ministry units “Warmie” and more than 30 units of modern military equipment.