Medvedev has headed the government

MOSCOW, may 8 — RIA Novosti. Vladimir Putin signed a decree appointing Dmitry Medvedev as the head of the Russian government. Previously voted for the lower house of Parliament. 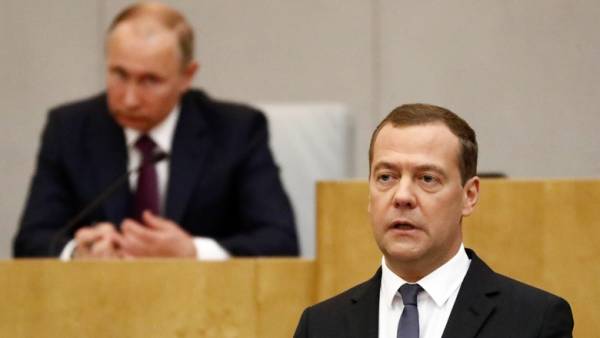 For the appointment of Medvedev as the Prime Minister voted 374 members (of 83.1%) with the necessary 226 votes voted against 56, abstentions were not.

Medvedev’s candidacy was supported by fraction of LDPR and “United Russia”, CPRF and “Fair Russia” voted against it. The voting was open, and the question about the premiere was the only one at the meeting.

The state Duma called for Vladimir Putin submitted the candidacy of Prime Minister. The President noted that Medvedev “was led by the government in the difficult years.”

“Despite these difficulties, the government managed not only to address extraordinary emergency tasks, but also to keep the perspective of development, constantly increase these opportunities are aimed at the medium and longer term,” Putin said, urging MPs to approve Medvedev’s Prime Minister.

Then before Parliament Medvedev spoke, telling about the results and the main directions of work of the government. He also answered the questions of the representatives of factions.

“We have formed a quality basis, and less than a month ago in a government report I have talked about the mechanisms we have jointly launched, on the results that we have achieved over the years of the previous government, which I headed,” — said Medvedev.

He promised that in case of approval of the Prime Minister’s new Cabinet of Ministers cooperation with the state Duma will be more successful than the former.

The resignation of the government

On the eve of the day of the inauguration, the government resigned. Then the President appointed the Prime Minister the candidacy of Medvedev, who headed the government of the previous term.