New the may decrees of the President will cost eight billion rubles, said at a meeting of the state Duma, acting head of the government Dmitry Medvedev. His words leads to “Interfax”. 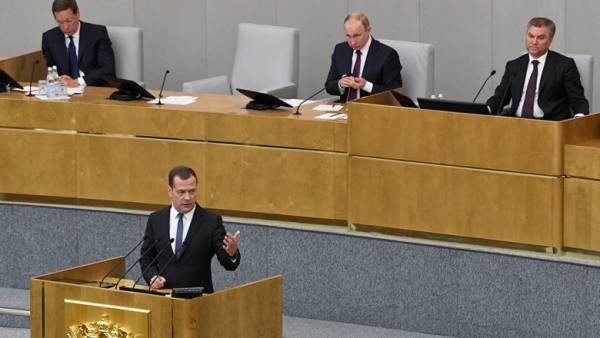 Day 8 may at the meeting with the faction of the Communist party he said that we are talking about the plans until 2024, says RBC. According to the acting Prime Minister, he “held a dozen meetings” to provide funding for new decrees. “Within these funds, these problems will be solved”, — said Medvedev. “Minimum” means found, he said.

President Vladimir Putin may 7, signed a decree on the national goals and strategic objectives of Russia until 2024. The head of state set the task before the government is to form a system of protection of patients ‘ rights, create mechanisms for direct participation of citizens in formation of a comfortable urban environment, to increase fertility and create the basis for the development of high-speed rail between major cities.

Bloomberg in April estimated planned social expenditures of the Russian budget for the next six years to 10 trillion rubles. Putin’s press Secretary Dmitry Peskov said that the Agency’s calculations are incorrect.

Putin signed a list of strategic tasks of Russia in may 2012. The so-called may decrees included raising public sector wages, increasing the share of investment in GDP, growth of labor productivity, the creation of 25 million highly productive jobs.

In December 2017, Putin noted that more than 90 per cent of targets were achieved.