“Supporters of Navalny on Tverskaya openly provoked the police”

“Someone even threw bottles at police and stones”. 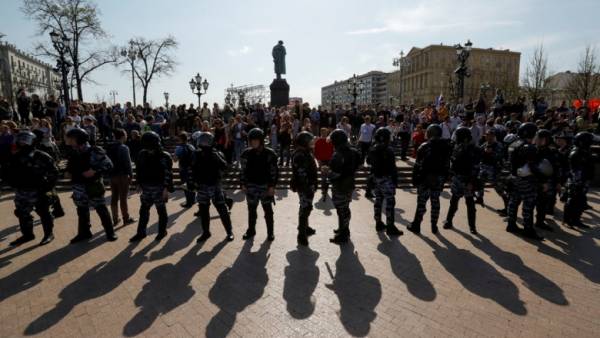 MOSCOW, 7 may 2018, 18:10 — REGNUM. The state Duma it is time to consider the laws stiffening penalties for unauthorized rallies, according to Professor of National research University “Higher school of Economics” Oleg Matveychev.

The scientist that almost everything that had to do with the action of the supporters of the Fund of struggle against corruption on Saturday, the fifth of may, was a provocation.

“Provocation was the fact that the fifth of may, the share of supporters of Alexei Navalny was scheduled just before the inauguration of Vladimir Putin. That the Navalny supporters took to the inconsistent place — they were offered their usual good place on Sakharov Avenue, but they went on Pushkin square. I understand why it was done — Sakharov would have been obvious that supporters of Navalny came about a thousand people, and it would look very undignified. And on Pushkin square you can mingle with the guests and give the impression that a lot of people. Accordingly, the shouting, and intentional resistance. Some even threw bottles at police and stones. Thus, the protesters tried to create a picture of some riots in Moscow, which, of course, extremely funny,” — said the expert in conversation with the correspondent of IA REGNUM.

“In a rally in support of the Telegram came out much more people and everything was much more organized. And then a few hundred people staged, allegedly, some noise. And all this was done solely in order to create the conditions for provocation and visibility of the riots. For good, of course people should be responsible for these actions, ” continued Oleg Matveychev.