MOSCOW, may 7 — RAPSI. Law enforcement officers during an illegal stock 5 may acted strictly within the law by detaining their participants, according to lawyers interviewed by RAPSI. The experts also recalled that the right to security are not only ordinary citizens but also the police themselves, who also have wives, children and elderly parents. 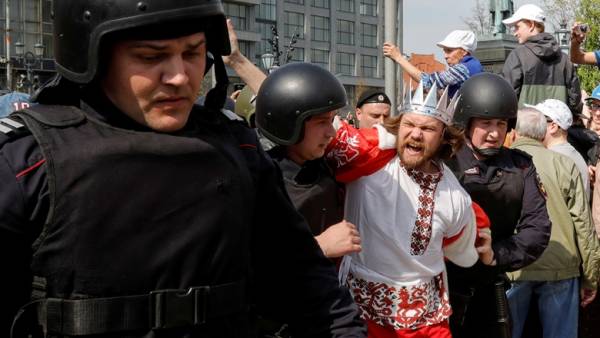 Last Saturday in the capital was inconsistent campaign blogger Alexei Navalny, in which, according to the police, was attended not more than half a thousand people. In other Russian cities similar activities were calm, with low turnout and no incidents. Despite this, the Internet extends the information on the hard arrests and violations of rights of citizens by police officers. RAPE asked the experts whether the right of the participants of unsanctioned events to do what you want and where you want.

An adequate response to the provocation

Lawyer Alexey Melnikov admitted that it had reviewed information about the past actions of the media, including disloyal to the government.

So I can judge objectively and from these materials it follows that the part of law enforcement it was quite peaceful and the police, for example, gently took the people on the territory of the Park, while those in the procession came out into the roadway. If we talk about the law, the police have the right to require the participant of an unauthorized action to stop breaking the law. And if the person agrees to such a request, it is often simply released. But if the police resist — nothing good is not over, as under the law it provides for administrative and even criminal penalties. Some media somehow, with some pride, described how the protesters snatched batons, and police officers and running away is absolutely unacceptable.Alex Melnikovskom

The expert believes that the recent stock police acted without unnecessary violence: “Possible errors “Bolotnaya case”, when the police blocked the passage of the crowd were taken into account, and now everything was done in an intelligent way. Unmotivated use of force by the police was not used, but only in open defiance of the requirements and even outright provoking. So I appreciate that the police actions were adequate and within the law”.

And we see once again that its intention is elected tactics of the conflict, the organizers who were offered the platform in the center, on Sakharov, without the risk of a stampede, not somewhere on the periphery. It was good enough, but the organizers of the rally deliberately took the people to the loaded area when the passerby is in a situation of no choice.

“I was surprised by the behavior of the organizers. But with them everything is clear: they want a pretty picture for the West on how to restrict the rights of Russia”, — said Melnikov, Recalling that police officers, like other citizens, are entitled to security because “they have children, wives and elderly parents.”

Lawyer Alexander Arutyunov, in turn, believes that the actions of police rallies have absolutely polar views, but the truth is “somewhere in between”: “There are reports that police dragged teenagers into buses. I think this is an excessive measure and act good. This is hardly justified when adult men are a huge small teen. But, on the other hand, still is an unauthorized meeting and the people deliberately went to the violation of the law.”

In Europe in such cases often apply a water-jet cannon, for example, but we have not reach up to this, but even the fact that people use force, I think in some cases too extreme. And those and others did not act quite adequately, I think. Extreme measures should not take place, but people in General should not go on an unauthorized rally.

“The police, of course, have to respond to the violation. Another thing is that this reaction should be adequate,” said Arutyunov.

In the opinion of the lawyer Stalin Gurevich, the police acted strictly within the law, because their job is to prevent administrative and criminal offences in the interest of other citizens of the country.

The lawyer recalled that Alexei Navalny was proposed to hold a March in the street Masha Poryvaeva to rally on the outside of the Academician Sakharov prospect, but the blogger refused from this place, calls supporters to take to the Tverskaya street in spite of the lack of sanctions.

“Navalny deliberately violated the legislation. Moreover, he conveyed to persons who potentially was going to participate in this meeting, these actions are actually illegal. That is, people coming to this event understand that they are breaking the law and can be brought to administrative responsibility. The police in turn have an obligation to prevent these crimes, therefore, their actions on may 5 was an absolutely valid,” concluded Gurevich.