Poroshenko accused Putin of striving to return to the Soviet Union

Russian President Vladimir Putin intends to return to the Soviet Union, winning the Ukraine. With such statement in interview to TV channel CBS News by the President of Ukraine Petro Poroshenko. 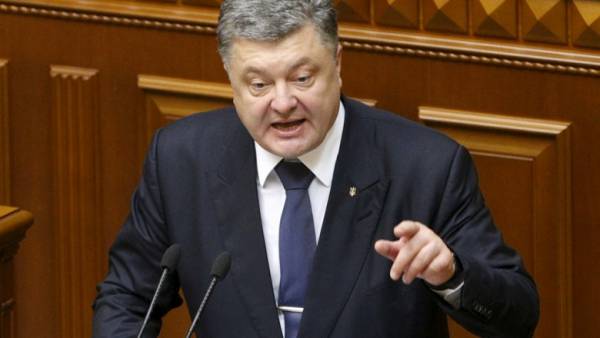 To restore the USSR, Putin, according to Poroshenko, wants to conquer Ukraine. “Yes, to re-conquer. And to return to the USSR or the Russian Empire. As you prefer”, he said.

In April, Poroshenko called “aggression” against Kiev “Achilles heel” of Russia. “Neither the Kremlin nor Putin, of course, did not expect such a result. The path to victory in this war against the Moscow aggressor passes through our victory in Ukraine”, — he said during the Kyiv security forum. To influence the behavior of Russia Poroshenko urged to ensure maximum benefit from anti-Russian sanctions.

Relations between Kyiv and Moscow deteriorated sharply after the reunification of the Crimea with Russia in March 2014 and the beginning of the conflict in the Donbass in April of the same year. Ukraine accuses Moscow regularly in the conduct of hostilities in the South-East of its territory and calls the aggressor, the Kremlin rejects these accusations.