“Overlooking the cemetery.” As errors in documents ruin the lives of

MOSCOW, may 8 — RIA Novosti, Irina Halecky. People without a residence or building, the solution in the space, and bureaucratic errors lead to incidents, which seriously complicate life. Moreover, because of legal absurdities people can remain without roof over the head. To solve the problem quickly is not always obtained. 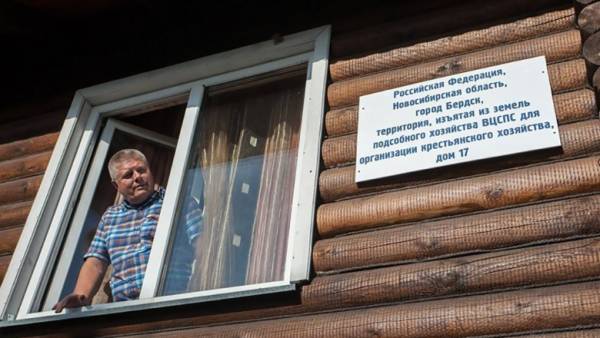 Street in Berdsk Novosibirsk region was included into the Russian Book of records for the longest name: “the Territory seized from the lands of the farms of the all for the organization of the farm”. 138 letters. In the 1990s, there was agricultural land in the region of the former iskitimskiy fields. And then they sold out shareholders.

Until 2016 the street did not have any names: the city administration did not want to admit dwelling located on it at home.

“The piece we acquired, have been issued for agricultural purposes. Here and formed the “bureaucratic pit”: the Land code, to build houses on such site, and according to local regulations of land use Berdsk impossible. But the city authorities decided not to bring the legislation into conformity with the Federal”, — says the correspondent of RIA Novosti one of the residents Anastasia Bogodukhov (name changed at her request).

In the management of town-planning of administration of Berdsk explained that while the land underneath these houses decorated for agricultural purposes, to give them another address not only if people at his own expense collect the whole package of necessary documents. As was said in 2016, the head of Department Fedor Karavachev, “if you develop this area, it is necessary to provide healthcare, schools, traffic, and the nearest school where the distance of a mile, which does not meet the standards that are set.”

As a result, the neighborhood became a residential area, a local had to make at his own expense the layout of the site and to speak at a public hearing in the administration.

“Because they do not issue permits for the construction, it is impossible to enter the house in operation, to the postal address, to register, a retirement allowance, to register in the clinic and so on. Like a Ghost town,” says Anastasia.

When a neighbor boy turned 14 years, the passport left him just a blank sheet in the place of residence, she says.

“Teenager like “no fixed abode”. Parents had to negotiate with friends, who did temporary registration”, — says a local resident.

In the end, the Novosibirsk regional court on applications for two families ordered the administration of Berdsk still assign home mailing address. The name taken from the documents 1993. So in the village were signs with the unpronounceable address.

Live, however, became more complicated, say local. Bogodukhov says that in the end people could not promptly to call even an ambulance, not to mention the shipment or order. Couriers simply could not find a street with such a complicated name.

The district fully serves water from a well, electricity installed in every home. The residents themselves riprap of the road, watching the sewers. Only about 220 plots on several streets, the names of whom came up with themselves, too: a Starter, Mars, hamlet, the Brothers Zavolokin, Successful.

To the streets assigned meaningful names, again appealed to the court. “Electronic charts and navigation normal street names are displayed but the authorities agreed to amend the new General plan until next year. By the end of summer, I think, will be the residence in their house. My son will turn 14, I hope he will get passport with all the stamps,” jokes Anastasia.