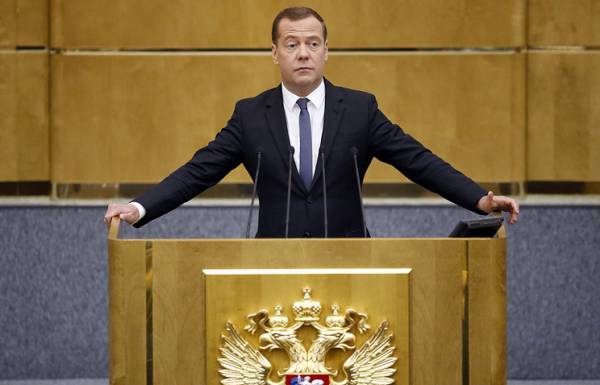 MOSCOW, may 8. /TASS/. State Duma deputies by an absolute majority of votes as expected on Tuesday approved the candidacy of Dmitry Medvedev for the post of Prime Minister. The nomination was made on the eve of Russian President Vladimir Putin immediately after his official inauguration as head of state.

May 8, Putin was personally presented to the Parliament the candidacy of Medvedev at the plenary session of the state Duma. The President gave a high assessment of Medvedev on a post of the head of the government and asked MPs to support the proposed candidate. The head of state noted the need to ensure continuity in the activities of the Cabinet of Ministers in terms of when it is necessary without delay to start implementing an ambitious program of socio-economic development of Russia, extended on the eve of the head of state and dubbed the “new the may decree.”

Speaking before the deputies, a candidate for the post of head of the government told about how he sees the tasks and areas of work of the Cabinet of Ministers and answered questions. Following the vote, held after the debate, Medvedev’s candidacy was supported by 374 deputies representing the faction “United Russia” and LDPR. 56 parliamentarians from the faction of the Communist party and “Fair Russia” voted against it.

Almost immediately after the end of the plenary session, the President signed a decree appointing Medvedev as Prime Minister, he should now proceed to the formation of the government.

Addressing the deputies, the President noted that Medvedev’s candidacy does not need any introduction, as he has for six previous years as head of the government.