CANNES (FRANCE), may 8. /TASS/. On Tuesday in France opens 71st Cannes film festival. The first film, which the audience will see will be the work of Iranian Director Asghar Farhadi “know it All” (Todos lo saben) with Penelope Cruz and Javier Bardem. 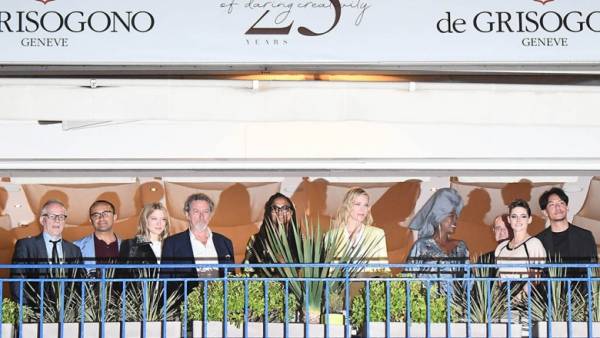 As stated Cruz, “to climb the steps of the Cannes Palace is a huge honor.” “This festival,” she says, “plays a special role in the development of cinematography”.

According to which entered into force new rules of the festival, before the premiere in the great hall of the Palace the movie will not be shown on pre-screenings for the press. As has been said by the actress, Hispanic picture Farhadi — family drama. Taking it was conducted four months. “This is the most challenging role in my career,” she said.

For Iranian picture Director, who on Monday celebrated its 46 years, this is the third appearance in Cannes. Asghar Farhadi 15 years ago otkrylsia Moscow film festival. In 2003, his painting “dancing in the dust” (Raghs dar ghobar) was one of the winners of the Moscow international film festival: prize of the “St. George” for best actor got the starring, Faramaz gharibian.

The film by Russian film Director Kirill Serebrennikov “Summer”, the plot of which is based on little-known facts of the biography of the rock musician Viktor Tsoi, is also included in the main competition. It takes place in the summer of 1981 in Leningrad, where under the influence of Led Zeppelin and other rock stars of the emerging Russian rock.

As earlier told TASS producer Ilya Stewart, “to be in main competition at the Cannes film festival — a sign of absolutely world-class picture.”

In his opinion, Russian films quite seldom observed at this level. Hopes producer, “the international audience will be very interested to watch how the characters first fall in love, create music and sincere friends”. The Kirill Serebrennikov will not be in Cannes because he is now under house arrest on charges of embezzlement of budget funds. He participated in the Cannes film festival in 2016, when his previous film “the Apprentice” received the independent film award by the French name françois Chalet.

The founder of the “New wave” Jean-Luc Godard participates in the current competition with a new picture “Book in pictures” (Le Livre d’image). At Cannes 87-year-old Director was greeted by large posters with footage from his film “Pierrot Le fou” (Pierrot le Fou), which starred Anna Karina and Jean-Paul Belmondo.

This painting was made in 1965 and became the latest in a series of successful movies, which opened the first scene of Godard’s “breathless” (“A bout de souffle”, 1960). Since then, the Director has created 42 feature films and 39 short films.

It was first performed on the pages of the French magazine “Express” (L’express), and then became increasingly applied to copyright of the Cannes film festival.

American craftsman spike Lee will bring to the côte d’azur his film “Black all kinds of things over” (BlackKKlansman). His compatriot David Robert Mitchell will present the Thriller “Under silver lake” (Under the Silver Lake) with the granddaughter of Elvis Presley 28-year-old Riley Keogh in one of the main roles.

Cinema Asia will be represented by seven films. Among them — the work of Chinese Director Jia zhangke “Ash is the most pure white” (Ash is the purest white).

The verdict of the jury

Just in the main competition of the 21 work. To decide who gets the Palme d’or jury will be headed by Australian actress cate Blanchett.

Russian cinema in its composition is the famous film Director Andrey Zvyagintsev, which account for several awards at the Cannes festival and the main national award of the French film “Cesar”.

In addition to the main competition, four other sections of the festival presents about three dozen paintings.

The original trilogy of “Star wars” Director George Lucas ended in 1983. Only in the late 1990s he decided to reboot the franchise, removing three films about the events preceding the action of the first three episodes.

The history of the festival

The first Cannes film festival was scheduled for September 1939, but was cancelled due to world war II. In the end, he was held in 1946 and then occurred every year except for 1948 and 1950.

The biggest success of the Russian film industry at Cannes has become in 1958 a film by Mikhail Kalatozov “the cranes are Flying” with Tatyana Samoilova and Alexey Batalov. The picture was recommended by the French filmmaker Claude Lelouche watching her shooting at the “Mosfilm”. The film won the “Palme d’or” and has collected one of France more than 5.5 million viewers, entering the three leaders of the French rental.

In 1968, the festival ended prematurely and without awards. Jean-Luc Godard and some of his colleagues-the Directors demanded to cancel the screenings in solidarity with the strikers throughout France workers and students. Spanish Director Carlos Saura clung to the curtain on the stage of the Cannes Palace to prevent the premiere display of his paintings. About these events the festival 2018 will tell documentary Jerome Vivona “Revolution in the Palace.”

Starting in 2018 the organisers of the Cannes festival issued a special pass for young movie lovers. To do this, everyone aged 18 to 25 years was enough to send the organizers a motivation letter.