On Tuesday afternoon, the state Duma will discuss the issue on giving consent to the President on the appointment of the Prime Minister. 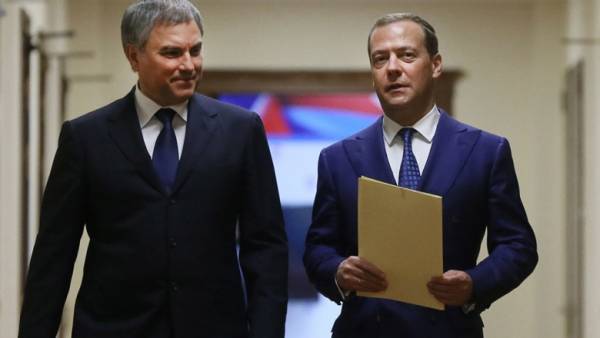 On Monday Vladimir Putin, the fourth time entered the office of the President, proposed to leave on this post of leader of “United Russia” Dmitry Medvedev. On the same day, a candidate for Prime Minister in consultations with the factions met with members of the same party and the liberal democratic party. Both meetings were attended by the Chairman of the Duma Vyacheslav Volodin, who plans to visit on Tuesday and on consultations with Medvedev, Communist party and “Fair Russia”.

To submit the candidacy of Prime Minister on regulations and has the right presidential envoy, but the interlocutors in the Duma claim that there on Tuesday waiting for Putin himself. The candidate will perform with the program, it will ask two question of the faction, followed by the speeches of the leaders of the factions and voting. Objective to collect a certain number of votes this time there is no — in the Duma overwhelming majority of United Russia and the question of votes had not been raised, says a person close to the presidential administration.

United Russia has decided to consolidate to support their leader. Named Medvedev at a meeting with party members candidates in his deputies, the deputies also approved. On Tuesday, the United Russia may ask Medvedev about the future — for example, the implementation of the message of the President, suggests a source in the Duma: “to Ask nothing special, since all possible questions asked on the report of the government”. Will support Medvedev and the liberal democratic party said its member Mikhail Degtyarev.

According to him, questions on fraction asked different, but the plenary is likely to be discussed the development of the digital economy and tourism, ecology and recycling.

While critical of all are the Communist Deputy Nikolai Kolomeitsev has said that the faction will not vote for Medvedev, a first Deputy Chairman of the Duma Ivan Melnikov has promised that the Tuesday meeting would be difficult. A source close to the leadership of the Communist party, believes that the intrigue can only be whether the Communists are hard to vote against or just abstain.

To vote for, no one will, he says: “It’s political suicide.” Questions to the candidate, the Communists are still undecided, although, according to Kolomeitseva, “they are sure to be interesting.”

“Fair Russia” in General will also be against Medvedev, said its leader Sergei Mironov after the meeting of the faction: “There is a caveat: we several colleagues were given the opportunity for a free vote, but the vast majority of solidarity would vote against.”

The source in the faction explains that the exception is made for the chairmen of the committees (G. Aksakov, Galina Khovanskaya and Leonid Levin), who work in close conjunction with the government. In addition, as described in the office of SRS, the faction intends to raise the issue of the illegality of combining the posts of Prime Minister and party leader to submit a bill.

Among other important SRS issues — the national renovation, pension reform and social justice.

Medvedev, perhaps, would be comfortable to vote for him, but such political requirements probably not, says political analyst Mikhail Vinogradov: “the Statement of the Prime Minister in itself is an important symbolic step to him again to support some conclusion Medvedev’s legitimacy at the Vice presidential level. Especially for the part of deputies the vote is psychologically not very comfortable. Yes, and that too to strengthen Medvedev, nobody is interested”.

“It is evident that Medvedev feels very confident, therefore, some additional external effects in the statement he is now particularly useless. The figures support will still be quite convincing,” adds political analyst Dmitry Badovsky.