Attack helicopter Ka-52 alligator of Russian air force crashed in Syria, is unlikely to have been shot down by radical Islamists. This opinion was expressed by the experts of Telegram channel 4 Directorate responsible for monitoring activities of terrorists. 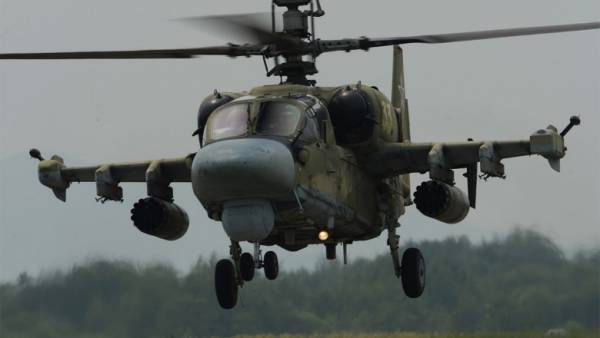 Earlier on may 8, the newspaper “Kommersant” wrote that, according to unofficial information, the fighting vehicle was destroyed from the ground by the calculation MANPADS in Eastern Syria.

“Apparently, refers to the militants of the “Islamic state” (IG, an organization banned in Russia). However, propaganda resources of the IG, including “Amak”, nothing reported about such attacks, even though the jihadists quick enough to report the facts of the use of MANPADS against enemy aircraft, especially if the goal was successfully struck” — said Directorate 4.

“To date, data are insufficient to definitively consider this version, especially that now ISIS has other problems, namely the attack of Kurdish militants remaining in the hands of the “Caliphate” territory. And if it does not take into account the fact that a Russian helicopter could hardly appear over ISIS controlled territory on the left Bank of the Euphrates” — sums up the experts.

May 7, the defense Ministry reported about the crash of a helicopter gunship, adding that both pilots were killed, their bodies were found and taken to base. According to Russian military agencies, the cause of the crash could be a technical failure. This is the seventh crash of the helicopter from the beginning of the Syrian campaign.

Reconnaissance and attack helicopter Ka-52 “alligator” is available since 2010. Machine building plant “Progress” in Arsenyev. Aircraft designed to conduct reconnaissance and destruction of tanks and military equipment, helicopters and other aircraft.