Cossacks are not included

The Council on human rights under the President (HRC) intends to find out what the Cossacks fought with the supporters of Alexei Navalny at an unsanctioned rally in Moscow on 5 may. Meanwhile, the mayor of Moscow and the Central Cossack army claim that related Cossacks dispersed the opposition. “B” was able to talk with the Cossack Vasily by Sicovam, who admitted that he participated in the fight, but claims that she was provoked by the supporters of Mr. Navalny. Human rights activists say that complaints recorded more than a dozen victims of the Cossacks. 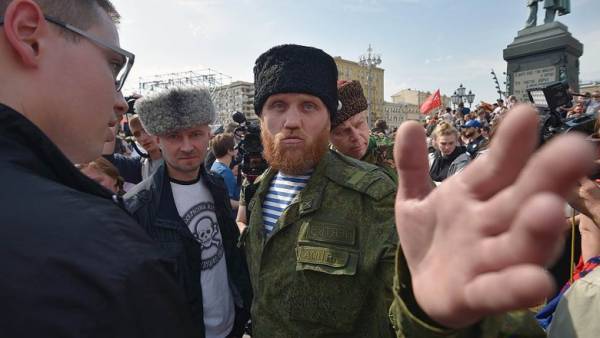 The HRC intends to find out from law enforcement bodies, as became possible mass arrests at an unsanctioned protest on 5 may in Moscow. The head of the HRC Mikhail Fedotov said that “the situation was aggravated by” the appearance at an opposition rally the Cossacks and activists of the Patriotic organization “National liberation movement” (GCD).

“This has led to scenes of violence. It is important to understand why they were there and who were these people,” said Mr. Fedotov. “The main conclusion does not change: the best means of countering the uncoordinated protest actions — it is their approval,” he added.

Recall that on 5 may in a number of Russian cities held an unauthorized protest Alexei Navalny “He’s not our king.” In the capital, the organizers filed an application for procession along Tverskaya street, but the city offered to move it to the Sakharov Avenue. Mr. Navalny still urged supporters to go to Pushkin square. In the square they first began to fight to be there with unknown people in Cossack uniform and activists NOD, and then the protesters began to detain the police (all were about 700 people).

The appearance of an area of Cossacks armed with whips, caused a wide resonance in Russia and abroad.

The British newspaper the Guardian wrote in detail about it, Recalling that the Cossacks will be involved in the protection of the world Cup. The publication of The Bell found on the photographs of one of the participants of the fight patch Central Cossack troops. This organization, the newspaper reports, citing documents of the mayoralty of Moscow, in 2016-2018 received a total of 15.9 million RUB. for the services of “security at mass events”.

However, the head of the Moscow regional security Department Vladimir Chernikov said in an interview with “Kommersant FM” that on may 5, “neither the Cossacks nor any other organization not included in the calculation of forces and means to ensure security.” The actions of the police and Regardie he called perfect. Representatives of the Central Cossack army also stated that he had not sent his Cossacks to guard the Pushkin square, and the Cossacks with their stripes, yet who came to the area, according to them, “expressed civil position.”

Bloggers have started to publish data on the Cossacks, which were able to identify the photos and videos from the rally. On one of the videos was depicted a bearded man who takes a young oppositionist poster “Open your eyes, you are a slave of the king!”, and then argues with the coordinator, “Open Russia” Andrey Pivovarov. In Telegram channel BewareOfThem wrote that is a member of the volunteer Union of Donbass Basil Boxes. The Lord of Boxes confirmed “Kommersant” that he really was at the rally and participated in the fight with the opposition.

However, he says that the majority of the Cossacks on the square had no relation to the Central Cossack army, referred to in the investigation of The Bell.

According to him, most of them were nereestrovyh (non-government) Cossacks of the two public organizations — “the First hundred” and “Crimean regiment.” And they came ostensibly independently from each other.

“This meeting discussed the Cossack groups, and someone we have wanted to go out to meet people — he said “Kommersant”.— We have a “Hundred” nearly a hundred people — and decided to go only fifteen. Already in the square we met the Cossacks of the “Crimean shelf”, which is actually not Crimea, and the Moscow region. But our organizations are not friends, so we were separately.” He acknowledged that the area had a few people from the Central Cossack troops, “but we also didn’t communicate”.

Version Basil Jasikova, the Cossacks came to the square to mingle with supporters of Alexei Navalny, were not going to participate in the acceleration activities.

“There was fifteen hundred people (the same count of GU MVD in Moscow.— “B”), and we have a maximum of 35 in total, and only two whips. For any money, we would not have to climb on a crowd,” he urged. Cossack claims that he even managed to peacefully communicate with Alexei Navalny, however, the opposition allegedly showed aggression. “Someone started to bully — say what you came here for, it’s our town. Someone cap me started to shoot down, the other began to send his mother, then began to blaspheme the Orthodox faith…— complains Cossack.— Well, we could not resist”.

The protesters called his allegations false.

“The Cossacks acted cohesively as a team, — says the participant of the meeting Darya (the”y” does not mention her name, as she is a minor).— They stood in a hitch and began to push us to the Riot. Apparently to make it easier for them. I was kicked, my friend was driven into the circle of Cossacks and began to beat. He let go only when he realized that they are removed”. Daria intends to make a statement on the fact of causing her bodily harm. At the moment, defenders of the “Agora”, “Zone rights” and “Public verdict” recorded more than 15 complaints of beatings by the Cossacks.

The opposition complained that the police detained mainly protesters — and allegedly paid little attention to Cossacks and the GCD. Detained at the rally, activist of the “Open Russia” Kirill Grigoryev said that in the police station, he pretended to be a member of NOD and was released without a Protocol.

“When we were brought in alekseyevskoye, police station, the police immediately asked one of the NODES. I jokingly pointed to himself. He took me into the hallway and asked to write the names of other members of this organization,” — said the oppositionist. He wrote the names of ten people”, then everyone on the list gave passport and was released.”