MOSCOW, may 7 — RIA Novosti. Orbital Observatory “Hubble” has received photos of a giant cluster of galaxies RXC J0032.1+1808 in the constellation of Pisces, which is among the 40 most distant and ancient “families” of stars in the Universe around us, according to the website of the space telescope. 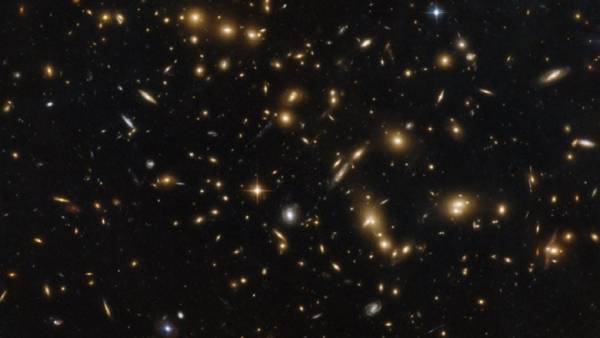 A large part of the galaxies in the Universe around us, including the milky Way itself is part of the larger clumps of matter, clusters and galaxies superscaling. Many of them, as shown by recent observations that extend for millions and tens of millions of light-years, and have a lot of tens to hundreds of trillions of solar masses.

Many of them, including cluster RXC J0032.1+1808, whose photo “Hubble” has received recently, located so far from Earth and the milky Way that can only be seen with gravitational lenses — special curvatures of space-time, amplifying the light which arise in the vicinity of large galaxies.

Using such lenses, the scientists can follow the motion of galaxies inside RXC J0032.1+1808, and other “families” star cities. Such observations have helped astronomers to find the two largest structures in the Universe, affecting the movement of the milky Way and all other nearby galaxies.

One of them includes the so-called “Great Attractor”, superstamina of galaxies Abell 3627, and “Great Repulsive”, an enormous area of voids located outside our Galaxy. The study of these objects, including with the help of Hubble have helped astronomers to understand why the milky Way is moving unusually quickly relative to other galaxies, and uncover some of the mysteries of the history of the formation of these giant objects.

Now, the Hubble will be holding a census among the biggest clusters of galaxies of the universe, getting them detailed photos of the project RELICS. These data, as scientists hope, will help to obtain the first accurate estimate for the mass of dark matter and understand how ended the “dark ages” at the dawn of adolescence of the Universe when it was opaque to visible light and other forms of electromagnetic waves.

In addition, the study of ancient clusters of galaxies, as cosmologists today I hope, will help us to understand the role in their education and life is played by dark matter and dark energy, and how their structure and distribution in the Universe associated with the distributed matter in the universe in the first moments after the Big Bang.