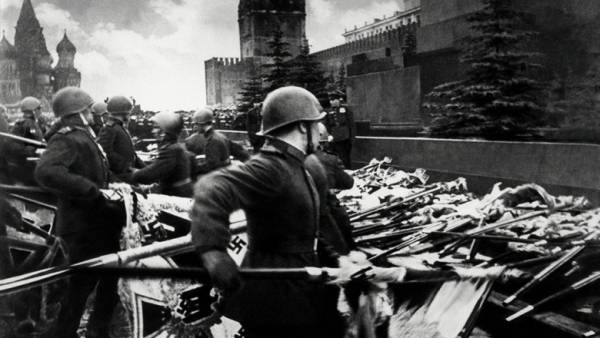 In early December 1941 the Wehrmacht was defeated at Moscow. A few days later, States join in the fight against Nazi Germany. Since then, the opposition to fascism is finally and irrevocably turned into the Second world war.

Between the Western outskirts of Moscow, and advanced armored units of the Germans, a distance of some 40 kilometers. According to the memoirs of Georgy Zhukov, 19 November 1941, Stalin called him the commander of the Soviet troops near Moscow and asked whether he was sure about the fact that the capital will be able to stand against the Germans. Stalin: “I ask You about the pain in the shower. To be honest, as a Communist”.

General Zhukov, outspoken and fearless, who organized the defense of Leningrad and one of the few who dared to honestly answer the questions of the dictator, very bravely, said: “Moscow will certainly hold”.

Years later he admitted that it was not felt that confidence which talked with Stalin. And where it was taken.

Since the attack on the Soviet Union on 22 June 1941, German troops suppressed any resistance. They smashed thousands of Soviet tanks and jets, captured several million of the red army, which eventually brought to starvation in terrible conditions in the camps for prisoners of war — only boiler in Kiev in late September laid down their arms 665 000 Soviet soldiers.

Them from the Baltic to the Black sea stretched a wide strip of death and devastation, where the “operational group” of the SS dealt with the Jewish population. However, the Wehrmacht still was not able to conclusively decide the outcome of this ruthless war; the Red Army did not give up.

The latest estimated onset of the East Hitler’s army, the operation “Typhoon”, implemented 78 divisions, almost two million military army group “Center” was sent to Moscow. This attack, according to the strategy of the Germans was to be decisive. 20 October 1941 the Germans with their three tank armies managed to break through the Soviet front line, again to surround 673 000 Soviet soldiers at Vyazma and Bryansk “pot” to the South-West of Moscow, and eventually to approach the capital. On the night of October 15, German troops broke through the main defensive line of the capital, the Mozhaisk defense line, a hundred kilometers from the center of Moscow.

Moscow turned into a mass Exodus

The city started to panic, Muscovites fled, later called the mass. The government had already been evacuated to the East, like the embalmed body of Lenin; at the time, as the Muscovites stormed the trains going to the East, and a scary secret service NKVD dealt with looters, as well as imaginary or real deserters, Stalin decided to stay.

A few days before, Zhukov on the orders of Stalin led the defense of Moscow; however, in a General between the Germans and the capital was just 90,000. First, he ordered the strengthening of the Mozhaisk defense line, and the construction of 15 kilometres from the centre of the second defensive ring, consisting of trenches, antitank traps, fire lines and barricades. Several thousand women and children were directed to the construction of fortifications. On 19 October state of siege was declared, later, the journalist Ilya Ehrenburg recalled that the mood was “bad”.

But at the end of October, the mood has changed dramatically, now it has become “heroic” after the war, according to Muscovites, the panic receded: the Germans weren’t here yet. The Supreme command was sent to the Mozhaisk defense line six armies.

On both sides of the front the Germans and Russians are stuck in the mud of autumn has begun “to thaw”.

Ring around Moscow failed to close as soon as it was planned by the Supreme command of the land forces of the Wehrmacht (OKH). The Germans suffered serious losses, the supply of the soldiers who went to the front at the height of summer, weapons, ammunition, and winter clothing was suspended.

Tanks and other combat vehicles considerably deteriorated, and the soldiers were exhausted after four months of “blitzkrieg”, which finally was completed after six to eight weeks. The Wehrmacht hardly had the military reserves. Back in August, the chief of the General staff Franz Halder admitted: “Colossus-Russia we have been underestimated”.

And yet this recognition is not realized in practice. The hubris and arrogance of the German dictator and almost without exception, loyal generals against the “Bolshevik nedolyudyam”, supported by the ideology of underestimating the red Army and its officer corps, as well as ignorance, regarding such aspects as the size of the country and its military production — all this has reached such proportions that the failure of either not paying attention or immediately declared them to overcome.