Czech Republic admitted the production and storage of “Newbie”

Nerve gas “Beginner” in small quantities were produced and stockpiled in the Czech Republic, said the President of the country Milos Zeman in an interview with TV channel Barrandov. 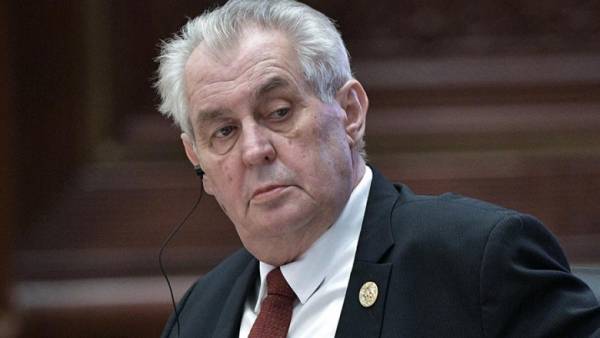 “We had produced and stockpiled a “Newbie”, albeit in small numbers. We know where and when. Not be hypocritical. No need to lie about this”, — quotes his words TASS.

The President explained that the poison was tested in November 2017 at the research Institute of the Ministry of defence in Brno (South-East of the Czech Republic). After that, the substance was completely destroyed.

However, Zeman did not see anything objectionable in the manufacture of nerve gas. He explained this by the fact that the Czech chemical defense unit should examine the poisons to be able to counteract them.

British agent and ex-Colonel of the Main intelligence Directorate (GRU), Sergei Skripal and his daughter Julia was poisoned “the Rookie” on March 4 in the British Salisbury. The girl was already on the mend, but her father is still in critical condition.

London and a number of Western countries have accused Moscow of involvement in the incident. The British side argues that a toxic substance was produced in the town of Shikhany, Saratov region. In Moscow all accusations categorically deny.

Meanwhile, the OPCW has recognized that the venom could be made in any country, including the United States.