Flintlock plate, found in the grotto 25 kilometers from Simferopol, were covered with engraving. Similar statements had previously been considered controversial, because of a notch could appear by chance. However, it discovered scientists have created a method that helps to distinguish a simple from scratch marks created intentionally. 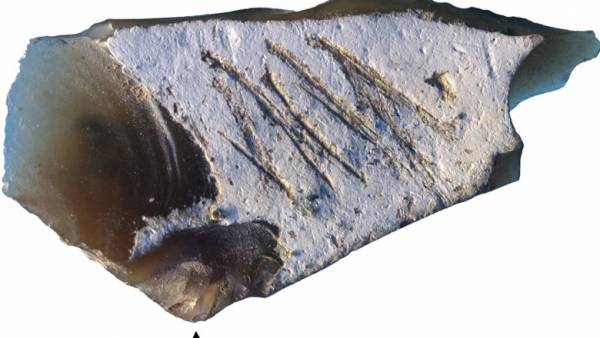 This was the archaeologists said in an article in the journal PLoS One.

The find is a flat piece of flint — mineral formations, consisting mainly of silica (SiO2). He was found on the premises Kiik-Koba in the Crimea, where in the early Paleolithic lived representatives of Acheulian culture (1,76 to 0.13 million years ago), which is then replaced by the Mousterian (it lasted 40 thousand years ago). The Parking lot was previously found Neanderthal remains, which have produced such tools. For example, near a plate of the same layer in the course of excavations 1924-1925 recovered the skeletons of an adult Neanderthal man and child.

Made about 35 000 years ago (middle Paleolithic) flint plate is one of a large series of artifacts of this era, on which visible marks or scratches. Such findings are known for 27 sites in Europe and the middle East. Each time the researchers raised the question of whether the notches symbolic value, or arose by chance in the course of processing or use of the subject.

Flintlock plate with 36 mm long, 18 mm wide and 5.75 mm in thickness, was carefully studied. The researchers drew attention to the order of application of scratches, their mutual arrangement, size and depth. They examined microscopic inclusions of the instrument, which was created incisions. The fact that all the scratches are concentrated in one place, on top of the white layer on stone, and their direction almost parallel, have convinced scientists that the Neanderthal engraved intentionally, and most likely the right hand.

The manufacture of such markings demanded four types of action: superimposition of lines from left to right, scribbling lines in the space between the already done, the creation of new such combinations of lines to the left is already done and a small change in the bending of the new lines.

If this interpretation is correct, then these stones with markings might have for Neanderthal symbolic value or used in communication. In this case, all of these findings, the authors of the study, it should be put in line with the burials of the Neanderthals, ornaments and decorations.