Eyewitnesses claim that the pilots were trying to control the plane. 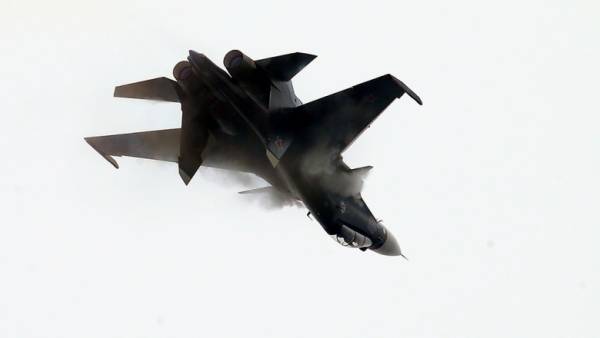 Russian su-30SM fighter jets crashed into the Mediterranean sea off the Syrian coast in the afternoon on 3 may, killing two pilots of the Russian space forces. Engine fighter aircraft stalled at a height of about 200 meters in about 40 seconds after takeoff from the airbase, told one of the witnesses. The plane at least three times turned over in air and fell in the water left side tail down, according to the Telegram-channel WarGonzo with reference to the eyewitness.

“Before you hit the water, the fighter flipped in the air at least three times, and then fell into the water of left side tail down. The first crash came two of the fishing boat, hoping to save the pilots. According to locals, the sea depth in this square is 17 meters”, — writes the author of the channel, journalist Semyon Pegov.

Eyewitnesses also said that the pilots tried several times to align the aircraft. Perhaps, therefore, neither of the two pilots did not ejected. Of the five attempts to align two were almost successful, noted the two sides WarGonzo.

In addition, according to the information channel, the picture of the crash, distributed social networks may be a fake. This was stated by the source “already among the military.”

The wreck of the su-30CM is trying to raise from the bottom to deliver to the base in Tartus. There is a wreckage to examine the aircraft from the airfield Hamim. On site there are about 20 divers to the hull of the fighter attach the cables. “Square three patrol boats of the Navy of Russia, also came to the place of warship of Tartus are equipped with special crane,” writes WarGonzo. After examination of parts of the aircraft they would be sent to Moscow by plane of the Ministry of defense, told the channel source in the defense Ministry.

A possible cause of the crash of a fighter, the defense Ministry called the getting birds into the engine. Investigation of all circumstances will be engaged by the interdepartmental Commission. However, it is known that the su-30 can fly with one engine.

This was confirmed by the master of sports in aerobatics jets Andrey Krasnoperov in the comments of radio “Moscow speaking”. According to him, below the plane refused two engines at once, he had to get into a flock of birds “the size of the herons”, which is unlikely.

“If one falls, it flies perfectly on the other,” added the pilot, noting that the fighter could do something to prevent it during takeoff. Representatives of the defense Ministry previously said that “there is no fire exposure on the plane was not”. Krasnoperov also reported that pilots were able to eject as the su-30 is “reliable catapult that not one pilot was saved already”.

The commander of the crew of the crashed su-30 was major videoconferencing albert Davidian, found earlier Telegram-channel Mash. According to WarGonzo, the plane rose into the air from the base of the Thai police to patrol the coastal zone and adjacent to the base area. The pilots probably tried to put the car on the water.