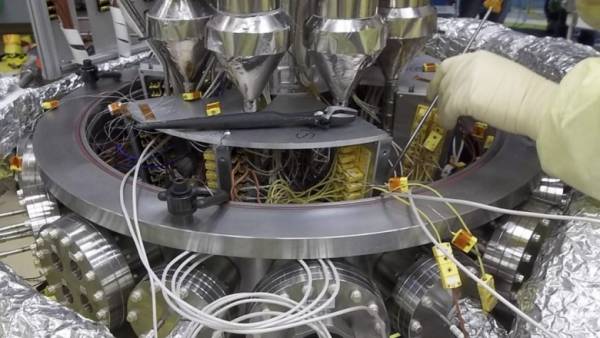 This at a press conference, announced the representatives of the space Agency, was broadcast on the organization’s website.

The reactor was tested from November 2017 to March 2018 in the desert of Nevada. As stated by representatives of NASA at a press conference, during testing the performance of the reactor was higher than expected.

As the fuel Kilopower uses uranium-235, except for the actual reactor unit includes a Stirling engine and alternator. Technology allows us to continuously produce up to 10 kilowatts of power for ten years.

How wrote portal Spaceflight News, the device is small in size (the core of the reactor is comparable with a roll of paper towels), it is quite easy, which is important when transporting to other planets.

NASA explained that the use of solar energy on Mars or on the moon difficult: the satellite of the Earth, cold night lasts 14 days, occur on Mars are dust storms, which can go for several months. Therefore, for manned missions and colonization of planets need a source of energy, able to work in extreme conditions.

LIVE NOW: Discover how we tested our kilopower project to see if this new @NASA_Technology could provide the energy needed for future missions to explore the Moon’s surface. https://t.co/ZuxLDtRxxM Questions? Use #askNASA pic.twitter.com/rbczcRaZMy

The Deputy head of NASA for manned spaceflight William Gerstenmaier 20 April confirmed that the U.S. plans to create a lunar orbital station Lunar Orbital Platform (LOP) — Gateway. According to Gerstenmaier platform with a crew of four astronauts will start to work in 2025, says Spaceflight News.

Using LOP space Agency plans to study the various aspects of landing a man on the moon, and to understand whether it is possible to use the station as a staging base for Mars missions. For the program LOP — Gateway will use the Orion spacecraft created by Lockheed Martin.

To output the ship into orbit of the satellite is a super-heavy rocket Space Launch System (SLS) is working at Boeing. Test run of a carrier is scheduled for the end of 2019, earlier it was repeatedly transferred.

The rocket was planned for the first time to start first in 2016, then in 2017, later NASA announced that the SLS will fly in November 2018. Affect whether the shifts of the test rocket on the lunar program, the space Agency did not elaborate, Reuters passed.