The military budget began to decline

Reduction in Russian defence spending was the largest in the world in 2017. 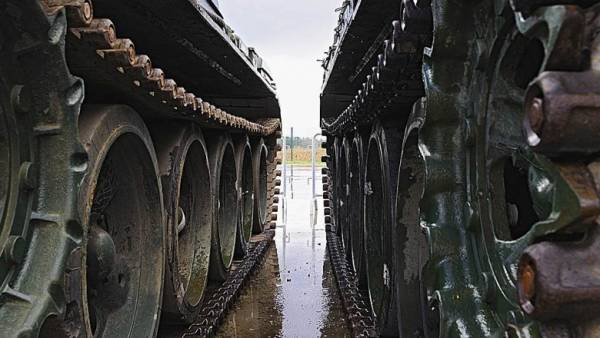 Russia’s spending on arms has declined in 2017 by 20%, which in absolute terms was most significant decline in the world. This is stated in a new report by the Stockholm Institute for peace studies (SIPRI). The decrease in expenses of Moscow on arms is due to planned reductions in this area, and with the fall of the ruble. Overall defence spending in the world increased by 2.2%. The main contribution made by China, Saudi Arabia, India and other Asian States. Most active in relative terms militarized bordering Russia beginners of the European Union. Romania, for example, has increased its military budget by 50%.

According to SIPRI, military expenses of Moscow in 2017 fell for the first time in 19 years (since 1998) and 20% ($13.9 billion), to $66.3 billion Thus, the share of military spending in GDP fell from 5.5% to 4.3%. “Army modernization remains a priority for Russia, however, experienced by the country since 2014 the economic problems limited the military budget,” — says senior researcher of the SIPRI Simon Wezeman.

On the reduction in defence spending, despite the Syrian campaign and confrontation with the West, President Vladimir Putin said for the first time in 2016. In December 2017, he noted that in 2018 the country will spend on defense 2.8 trillion rubles (about $45 billion at current exchange rates). In this case, Russia will move in the SIPRI rating from fourth to ninth place, behind, among others, Japan, France, and the UK. As noted on December 22 the Minister of defence Sergei Shoigu, the military budget, after declining in 2018 will amount to 2.8% of GDP (lower than in 2008). The Minister drew the attention of other countries to reduce military spending are not collected. In addition to the planned budget cuts and plays the role of a factor in the sharp decline of the Russian currency.

Deputy Director of the Center for analysis of strategies and technologies, Konstantin Makiyenko noted that the SIPRI estimates should be treated with caution and use the more relevant national statistics. “Reduction in defense spending is part of a plan, it is inevitable. One of the reasons is the periodic saturation (army new military equipment.— “Kommersant”). For example, on helicopters for the next ten years, it has already happened”, — said the interlocutor of Kommersant.

That is, the reduction is due primarily not from economic or military-political situation, and natural processes of re, the expert concluded.

Chief editor of Moscow Defense Brief Mikhail Barabanov recalls that in previous years, a major role was played by the issued state guarantees under credits for replenishment of circulating assets. We are talking about 1 trillion rubles of loans, which were taken by the enterprises, performing state defence order for the speedy rearmament of the Russian army (800 billion in 2016 and $ 200 billion in 2017). “These payments inflated the actual military spending (3 trillion 775 billion in 2016 and $ 2 trillion 778 billion in 2017), and now is normalizing,” he says. In addition, according to the expert, reduction of military spending in 2018 or 2019 was laid down in the budget plans of the last few years.

While Russia has reduced defense expenditures, they increased in Asia.

Champion (in absolute terms) in 2017, China was the picked them up by 5.6% ($12 billion), to $226 billion and has retained the second place after the United States. However, to call this militarization impossible. The country’s GDP growth made up to 2017 is 6.9%, so the share of defense spending in GDP adjusted for inflation did not change (1.9 percent). Experts also note that the growth of Chinese military spending in 2018 was the lowest since 2010. On the third place in the world, ahead of Russia, came to Saudi Arabia, spending more on defense all in the list of top 15 relatively to its GDP: about 10%. Riyadh increased its expenditures by 9.2%, to $69,4 billion amid regional conflicts, in particular, the confrontation with Iran in Syria and Yemen.

US military spending still accounted for 35% of global ($610 billion) — their level, according to the report, has not changed. Washington spends on weaponry 2.7 times more than its nearest competitor of Beijing, while the White house promised in 2018 to increase defense spending to $700 billion Assumes that the money will go to upgrading the US nuclear Arsenal, fleet expansion and the increase in troop strength.

Seriously increasing their military spending, India (she ousted France from fifth place with $63.9 billion) and Brazil (up from 13th to 11th place with $29.3 billion). The top ten apart from the already mentioned countries and France joined the United Kingdom, Germany, Japan and South Korea, whose positions in the ranking has not changed in 2016. They increment the military budget remained within the limits of the world average (about 2%).

The continuing growth of military spending in Asia, the majority of experts associated with the fact that China actually launched a “regional arms race”. This is especially evident in the case of India, the top five by size of defense spending. “In India, don’t claim victory over China in the competition of military spending and understand that the current state of the army and the military-industrial complex is insufficient to threats ranging from terrorism to China, — told “Kommersant” a senior researcher at SIPRI Peter Topychkanov.— However, positive dynamics is: is the modernization of the military industry, the growing participation of the private sector, stronger links with world leaders in this field (USA, Russia, Israel, etc.)”.

Most actively in the 2017 armed with the countries of Central Europe to which, according to SIPRI methodology include most former socialist countries.

Their military spending has grown on average by 12%. The record not only in this region but in the world (relative value) was Romania, which increased in 2017, spending on defense is exactly 50%. A 21% increase in the cost of Lithuania and Latvia. In absolute terms, their numbers still remained small: on the whole region in 2017 accounted for $24.1 billion of military spending.