Riga, protesters spoke out against transfer of Russian schools into Latvian

Several thousand people came out Tuesday to the main street of Riga — Brivibas — to combine may day demonstration to protest against transfer of Russian schools into the Latvian language of instruction, the correspondent of RIA Novosti. 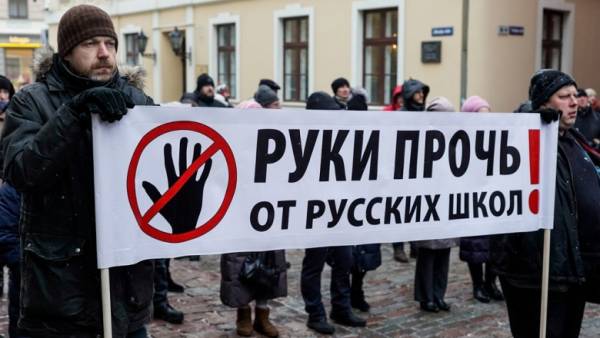 RIGA, may 1 — RIA Novosti. The event began at the Dailes theatre. The procession passed through the street Brivibas, past the Nativity Cathedral and ended at the Esplanade.

According to the organizers of the protest, the event was attended by from seven to ten thousand people.

People carried posters with inscriptions “Russian school = the world in Latvia”, “Latvia is my country, Russian is my language” and shouted the slogan “Hands off Russian schools!”.

In the procession also participated the Deputy of the European Parliament Miroslav Mitrofanov and the leader of the party “Russian Union of Latvia” Tatyana Zhdanok.

Zhdanok said that the March was organized in support of a small Latvian schools, which is going to close in the course of optimization.

Previous action against the education reform took place on 4 April. The staff of protection of Russian schools held a “March of angry parents” against what the President of Latvia Raymond Vejonis declared a law providing for gradual full transfer of school education into the Latvian language.

The Parliament of Latvia on 23 March, at the third reading adopted amendments to the law “On education”, providing for the transfer of all schools into a state language of training to the 2021-2022 school year. President Raimonds Vejonis on 2 April signed the law.

In Latvia live about 2 million people, of which about 40% are Russian — speaking. In the Republic one state language — Latvian, Russian has the status of a foreign.