As the street became Nikol Pashinian expensive in the premiere. 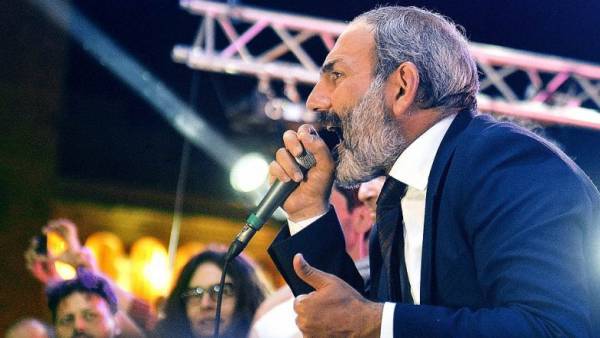 Armenia joined on Wednesday the decisive phase of the revolution. The protests have acquired unprecedented scale: people once paralyzed traffic throughout the country. The current government does not control neither the country nor the situation. However, her opponents power and control only the street. However, on may 8 the opposition leader Nikol Pashinian could occupy the post of Prime Minister. With details from Yerevan — the special correspondent of “Kommersant” Vladimir Solovyov.

Early in the morning on may 2, Yerevan turned into a pedestrian zone. Poured into the streets tens of thousands of people, and the intersections of the city turned into a dance floor. At the pedestrian Zebra, blocked by cars or trash cans the streets to the music of the radio danced by adults, students, pupils, their teachers and even preschoolers.

The protest became like a festival when on the road povytaskivali braziers began to roast on their meat and treat all comers.

In the morning it was closed and the highway from town to the airport. Who would want to fly, went there on foot, dragging suitcases. If the Armenian capital something and went, it was a truck full of bodies of people or cars, which were waving Armenian flags. And those and others are constantly honking. The rest of the transport or stopped, or unfolded. However, the drivers are polite meekly obeyed the instructions of the protesters.

Do well to drive ambulances. While social media spreads the message that inside emergency move MPs from the Republican party. After that, the vans have to stop and check whether there are parliamentarians who in the evening of may 1, voted against the approval of the leader of the protest movement Nikol Pashinian Prime Minister.

As a result deputies didn’t reach jobs in the National Assembly building on Baghramyan street. On the machines they could not be reached, and to explore the city on foot did not dare. And it was the right decision. Portraits of the Republicans during the night printed in large quantities and pasted all over the city in boxes and bridges. Under the window to those of the deputies whose home addresses were known, and in Yerevan they easy to learn, protesters came by chanting, “You traitor.” In the town of Artik to the office door of the Republican party brought a coffin and a wreath.

The call of Nikol Pashinian to start a General strike responded not only Yerevan. Roads, including international highway was blocked throughout the country. Unlock them only at 17:00 local time: asked Mr. Pashinyan.

Towards evening the Republic square was filled with thousands of fun people who were chanting: “Nikol — Prime.” By 19:00, when the meeting began, the area was brimming with supporters of Nikol Pashinian.

While in Yerevan there were mass celebrations of the protesters, representatives of the Republican party, which on may 1 in Parliament harshly criticized Nikol Pashinian, did not comment on what is happening. It was impossible to call anyone out until recently who ruled the country party.

In the afternoon there was the first — very polite statement. The speaker of the Parliament Republican Ara Babloyan called “stop illegal block of flats of members of the National Assembly and to refrain from interference in their private life.”

And when the rally in the crowded Central square was in full swing, came the news of the day: the head of the Republican faction Vahram Baghdasaryan said that on may 8 (according to the law, the second attempt approval of the Prime Minister by the Parliament must be held within seven days after the first) the Republican party will support the candidate for Prime Minister, who will nominate the one third of the deputies.

The candidate will again be Nikol Pashinyan, and register it on Thursday. About the readiness again to vote for him said member and a major Armenian businessman Gagik Tsarukyan, head of the faction “prosperous Armenia” — the second largest in the Parliament (31 MP 105). This means that Mr. Pashinian has 47 votes — along with its supporting factions “EFC” and “Dashnaktsutiun” (nine and seven seats in Parliament, respectively).

Change the position of the Republicans (58 deputies), previously voted against Nikol Pashinian, guarantee him the Premiership.

The meeting of Parliament, which will approve the head of government, to be held on 8 may. Mr. Pashinyan has encouraged more people not to take to the streets and not to conduct any actions. But instructed his supporters to closely monitor his page in Facebook — if you want to meet again, he will know.

“The only way out of this situation — to vote for Pashinian”, — said “Kommersant” Deputy Nikol Pashinyan-led faction “EFC” Ararat Mirzoyan. He is confident that the victory has already happened. “Can prediction to do on the days their posts will go to Deputy Ministers, Ministers, governors. And will declare the refusal to support the Republican party,” said Mr. Mirzoyan.

The prediction is already beginning to come true: on Wednesday the resignation was announced by the acting Minister of culture of Armenia Armen Amiryan.

Ararat Mirzoyan insists his country has experienced a revolution. But not color, and exceptionally velvety.

Here, no color revolution, it’s the accumulated years of resentment, fatigue, anger of injustice, including social, rampant corruption and the lack of the ability to do business. People went outside and made a velvet revolution without incitement from outside, without international money, without subtext.Ararat Kursangebote led by Nikol Pashinyan of the faction “EFC”

Nikol Pashinyan and to the failed vote in Parliament in fact became a national hero. In Armenia now the fashion for t-shirts with his portrait, images policy covered cars and Windows. After may 1 he became a political deity: when Mr. Pashinyan appears on the street, then going around the cheering crowd. He ask for autographs, with him doing a selfie, trying to shake hands or to touch at least the edges of the garment.

With him, and with no one else in Armenia, associate the hope for change.

Third-year student of journalism faculty of Yerevan state University Lilit Sargsyan explains why they have come to support Nikol Pashinyan: “My relatives do not live in Armenia. Father every year he goes to work in Russia. We all see poverty, corruption. We want to be heard and believe that Pashinyan could change everything. Serzh Sargsyan (former Prime Minister of Armenia.— “B”) is already gone. It means that something already happened.”

Russian language teacher at Yerevan school No. 5, 60-year-old Anush Khachatryan said that together with colleagues has protested the “future children”. She complains about the monopolization of the economy three or four oligarchs, over which all prices grow, and believes only Nikol Pashinyan: “no One except him, we have. Nobody could so many people gather and control”.

The Yerevan political scientist, head of the Caucasus Institute Alexander Iskandaryan explains the phenomenon of Nikol Pashinyan, without emotion and very coolly dissects the popularity of the politician: “He is a talented and creative person. Was correctly found the idea of non-violent actions. But the regime in the beginning made a mistake: they thought that with low legitimacy you can live forever, if you can institutionally to organize elections. No, you cannot. The error was the wish of Serzh Sargsyan to remain at the helm he promised after the second time to leave. If he left, and became Prime Minister someone else all this would not be”.

Loyal and a good tactic Mr Iskandaryan calls the personification of the protest, which began with only one requirement — the resignation of Serzh Sargsyan. “The first part of rallies activity was all on Sargsyan. He was declared the chief evil, — says the analyst.— The slogan was as wide as possible: we are against Serzh and for change. Under the slogan any stand. And no foreign policy — neither Russia, nor America, nor the West, nothing. That came: with one hand evil personified — Sargsyan, and the other personalized good Pashinyan”.

The expert believes that the Republicans will be difficult, if not impossible to maintain itself as a party, because it is difficult to maintain discipline in such a situation: “Cross already started.” But to Nikol Pashinian, according to Mr. Iskandaryan, have easy. “He’s got a giant support of the street, but there is nothing institutional. He’s never anything other than street politics, not engaged. There is no experience of the Manager, no team. And there is no positive programs, at least to us they were not given” — lists the analyst.

A separate and serious problem Alexander Iskandaryan describes the oligarchs: “there are Tsarukyan. He gives voice (to Nikol Pashinian.— “B”), but something he requires. And to bypass it it is impossible, it is necessary to know what to say, and his appetite is good. But after the velvet revolution of expectations what? Armenia will be Switzerland, monopolies would not be at all, everything will be great and will lead to lower prices. A situation in which the oligarchy will fight Tsarukyan is the largest oligarch — it is difficult to imagine.”