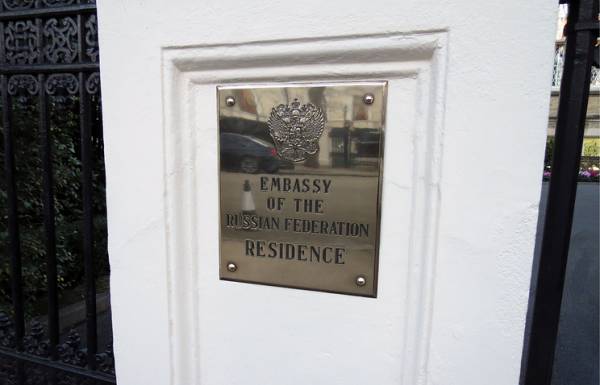 The Russian Embassy in London

LONDON, may 2. /TASS/. The Russian Embassy in London believes that the recent statements by British officials about the case Skrobala prove that addressed to Russia the charges were based on speculation. This was reported in Wednesday’s press-Secretary of Department, commenting on made a statement on 1 may the government adviser on the national security of the UK Mark Sedwill.

At the meeting with deputies of the parliamentary Committee on defence Sedwill admitted that British investigators have not yet established exactly who poisoned ex-GRU Colonel Sergei Skripal and his daughter Julia in Salisbury.

“Sedwill reaffirmed that sounded in the address of the Prime Minister of serious allegations and the ensuing far-reaching foreign policy decisions in mobilizing the political support of the Western bloc was based on mere speculation,” – said at the Embassy.

“No evidence of Russian involvement in this crime and development in Russia of toxic chemicals in violation of the international obligations the UK is not and can not be. It should be recalled that Russia has clearly stated in a diplomatic note that has nothing to do with this poisoning,” – said the press Secretary of the diplomatic mission.

About the British doctrine

Criticized in the Russian Embassy and the new national security strategy, referred to as the “Doctrine of merger” (Fusion Doctrine). It was introduced in late March and involves the use of all the features of the country, including its military, economic, diplomatic and cultural potential, to protect national interests. Among the elements of this potential is mentioned in it not only the most advanced military technology, but also economic leverage, and use on the world stage tools of diplomatic and cultural influence.

Commenting on statements made yesterday Sedwill, that the British reaction to the incident at Salisbury is an example of the application of the “doctrine of merger”, the Embassy noted that “it is contrary to the true interests of the British people”. “Instead of strengthening national security, it shall bear the risk of hasty, ill-conceived solutions to the detriment of the quality of Britain’s relationship with international partners and undermining the authority of the country. This also applies to creatures that “response to the behavior of Russia”, which chose London: expulsion of diplomats (with the inevitable retaliatory expulsion of members of the British missions), that is, those people whose work is in the relationship. During the period of withdrawal from the European Union Britain needs a opposite approaches”, – assured the Russian Embassy.