PARIS, April 29. /TASS/. Young oak, which the presidents of the United States and France, Donald trump and Emmanuel macron put on the White house lawn, was then excavated and placed in a quarantine phytosanitary control. This was reported by a source in the Elysee Palace, the French-speaking journalists to the newspaper The Huffington Post. 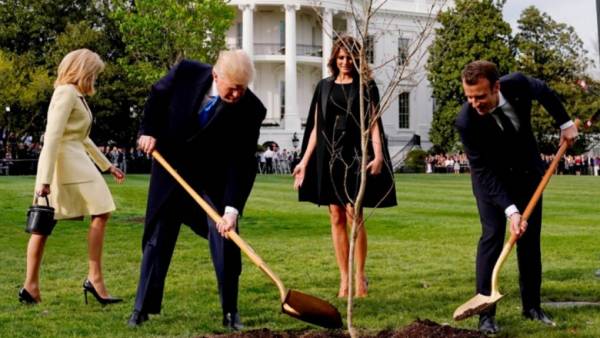 Earlier on Sunday, the British press drew attention to the lack of seedling on the lawn of the White house, Reuters circulated a photograph, where the location of planted trees is visible only to the circle of newly dug earth.

As explained by the newspaper, in the U.S. there are strict quarantine regulations for all imported seedlings, seeds, seedlings and even imported land. Oak brought by the President of France during his state visit and planted by the leaders of the two countries, was no exception. According to a source from the Elysee Palace, the quarantine of the seedling oak will soon end and it in no way has not suffered from another transplant. As the newspaper reported, health service, the United States agreed to make an exception to the rule and allowed the temporary planting plants at the White house solely on the insistence of President trump.

A young oak was presented to Trump the French President as a “symbol of long-term relationships”. A sapling was taken from the forest Bello (Northern region of France, near the Marne river), where in June 1918 was included in the history of the battle. Then the German army opposed to the French, the Americans and the British. During the fighting, which lasted 25 days, was killed, in particular, more than 2 thousand Marines of the American expeditionary force, and about 8 thousand were injured.