Russian floating nuclear power station “Academician Lomonosov” left the territory of the Baltic shipyard where she was built in 2007 and first went to sea. 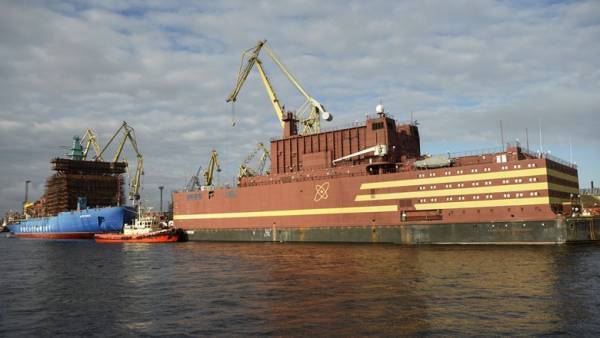 The ship will be towed away for loading of nuclear fuel to Murmansk, and from Murmansk to Pevek in Chukotka, where it will provide energy to the local grid. It is assumed that in 2019 the plant will be commissioned and it will replace obsolete NPP Bilibino and Chaun TPP, according to Rosatom.

Since in remote regions, the construction of the full plant is difficult, alternatively, offers a portable design with the atomic units.

In the US the vessel of a nuclear reactor existed in the middle of the last century and it has built a ship “Sturgis”, which until 1975 provides energy to the Panama canal zone. In Russia the project of a floating nuclear power plant started to develop in the mid 2000-ies, the ship “Akademik Lomonosov” was founded in 2007. It is equipped with two pressurized water reactor KLT-40C with electric power up to 35 MW each and heat capacity of 150 megawatts.

In parallel with construction of the station prepare and shore facilities at the port of Pevek. After completion of all preparatory work, the vessel will be connected to the local infrastructure and Chaun-Bilibino energy system.

Today the ship began to be towed from the territory of the Baltic plant in St. Petersburg enterprise “Atomflot” in Murmansk. There it will load nuclear fuel and will run reactors. After that, the ship towed to plentywood, where in 2019, it needs to be operational.

In 2017, the St. Petersburg design Bureau “iceberg” has announced that it will develop a technical project for a new multipurpose vessel of atomic-technological service that will be used, including, for recharging the ship’s nuclear reactors. It will service the promising Russian nuclear icebreakers and floating nuclear power station “Academician Lomonosov”.